Eventually, all automobiles will be fully technology-enabled. How we get there may be a bumpy road.

Connected car technology is racing ahead—but bringing that technology to life poses many challenges for today’s automakers. Consumers now expect their vehicles to seamlessly connect with their devices and also have the ability to upgrade to future technologies. Considering that the average lifespan of an automobile on the road now stands at eleven and a half years, automakers must address future compatibility issues while also prioritizing safety, especially as vehicles advance toward being fully autonomous.

In advance of their appearance at WCX 2020 SAE World Congress Experience, April 21–23 in Detroit, two respected industry leaders shared their views on what’s ahead—Chris Cook, President of Mobile Electronics Association, and John Waraniak, Vice President of Vehicle Technology at SEMA, are seeing many challenges for manufacturers and suppliers but also many opportunities. Don’t miss their WCX Leadership Summit panel discussion, Keeping Consumer Electronics Modernized and Safe Over the Lifecycle of the Automobile.

What are some of the challenges facing the mobility industry?

Chris: The big challenge for vehicle electronics is integration because the vehicle environment changes from year to year, depending on the automaker. 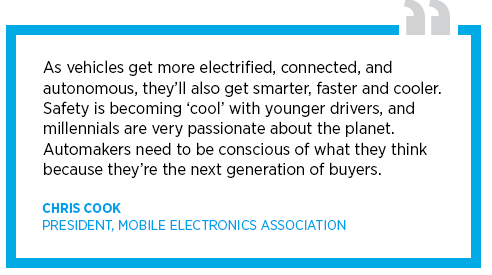 John: For aftermarket companies, vehicles equipped with the latest ADAS technologies pose challenges when seeking to modify and accessorize them. As the complexity of automated driving functions, products and systems increases, so too does the cost and complexity of testing and validation. ADAS systems are the gateway that will enable truly autonomous driving. SAE Level 3 is the most dangerous, where the system transitions back to the driver to take control. In fact, many manufacturers are opting to wait until the technology is better developed and then skip from Level 2 to 4.

Chris: Another big challenge is the infrastructure in our country. Automakers should be lobbying heavily for the improvements needed in order for advanced technologies to work, but right now it’s like they’re building vehicles for cattle paths.

John: We need smart traffic signs and smart traffic controls, and service providers like Verizon need access. They’re trying to use 5G, but it’s not optimal for vehicle-to-vehicle communications. These days, automakers are transforming into tech companies that make cars.

Where do you see opportunities?

Chris: The biggest opportunities of the next few years are twofold. One will be in the safety products—all-around cameras, backup cameras and 360-degree cameras are still strong. Also, lane-departure assistance is a growing category, both in fleet and at retail – both handled by these retailers.

John: Integration of passive aftermarket PAS features and products is relatively simple and has the highest aftermarket adoption rate of all ADAS systems. There is already a very strong aftermarket segment for passive PAS systems, mostly in the form of rearview cameras. Backup cameras are readily available for professional or do-it-yourself installation. More than 4.5 million units are sold annually, representing about $700 million in sales. That market is expected to grow to a $1 billion market by 2021.

Chris: As vehicles become more autonomous, entertainment becomes more desirable, because now drivers need something to pay attention to, other than driving. So it re-invigorates the ability to entertain the driver as well as the passenger in the near future. I see growth opportunities in in-vehicle entertainment as well.

John: NHTSA estimates that 25% of all parking-lot accidents are caused by vehicles backing up into another vehicle and estimates that a 46% reduction in accidents while backing up can be expected if all vehicles are equipped with backup cameras. Although those first-generation systems and technologies are rather basic, the technology, hardware and software integration will continue to improve and evolve with smarter and more connected products to detect vehicles as well as pedestrians, bicyclists and motorcycles.

What’s next for the industry?

John: As vehicles get more electrified, connected, and autonomous, they’ll also get smarter, faster and cooler. Safety is becoming “cool” with younger drivers, and millennials are very passionate about the planet. Automakers need to be conscious of what they think because they’re the next generation of buyers.

Chris: Over the lifetime of the vehicle, we’ll be able to implement all of the technologies we want instead of being constrained by a 20-year cycle. There’ll be 20 million vehicles on the road—what can we do to retrofit those vehicles? The outlook is promising for everyone—OEMs, the aftermarket and also the consumer.

John: These technologies are what will attract the next generation of mobility engineers.

Hear more from John and Chris, and explore everything that’s in store for connected vehicles at WCX—register today at sae.org/wcx.