What’s Down the Road for Autonomous Trucks?

California-based start-up TuSimple is racing to be first to market in the heavy-duty commercial sector—and that day is coming soon.

While autonomous automotive systems for passenger vehicles are generating a lot of buzz, autonomous heavy-duty trucks are quietly making their way onto the road as well. San Diego-based start-up TuSimple is one of several companies developing and testing autonomous technologies for commercial trucking, so we sat down with Robert Brown, TuSimple’s Director of Public Affairs, to learn more about the company’s achievements to date and its future plans. Don’t miss him speaking live at WCX 2020, your all-encompassing place for exploring all of the latest developments in autonomous vehicles and advanced driver-assistance systems (ADAS).

Your Package May Have Been Transported by a TuSimple Truck
Since March 2019, the company’s trucks have been carrying UPS goods on a route between Phoenix and Tucson to determine whether the vehicles can improve service and efficiency in the delivery company’s network. TuSimple currently operates more than 50 trucks on revenue-generating routes in Arizona, with plans to add new routes in Texas soon. 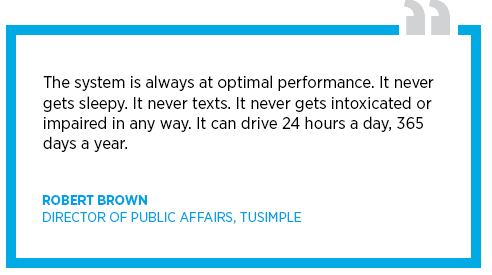 According to Brown, TuSimple is currently the only autonomous trucking company capable of driving “from terminal to terminal without human intervention needed.” He states, “We are laser focused on heavy-duty trucks—no passenger cars. Nothing else. Just heavy duty trucks.” That’s because the company determined early on that trucking was the most logical approach to self-driving due to its predominantly highway operations and its repeatable, and therefore predictable, routes.

SAE Level 4 Autonomous Is Here
TuSimple’s Class 8 tractor-trailer trucks operate at SAE Level 4 Autonomous, meaning they can deliver full automation without human intervention under defined driving conditions—the vehicle’s onboard system is in complete control at all times. But, current laws regulating L4 Autonomous driving require a driver in the vehicle at all times to take control if needed. Therefore, each journey includes both a safety driver and a test engineer to monitor the autonomous system.

TuSimple’s long-range goal is to bring the first commercial driverless truck to market. Brown claims that the company’s technology will increase safety, decrease transportation costs and reduce carbon emissions, potentially reducing the costs of shipping goods via tractor trailer by 30%. Limited driverless operations are planned to start by 2021.

TuSimple Has Developed New Perception Technology
Brown explains that one challenge the company has had to overcome is that transport trucks typically need a braking distance of about 100 yards, much farther than the distance needed for a passenger vehicle. This means an autonomous truck needs to see farther ahead in order to have enough time to recognize obstacles and make safe and effective driving decisions. At typical highway speeds, this translates to about 35 seconds.

In order to tackle this challenge, TuSimple developed a camera-based perception system that Brown says surpasses the lidar (light detection and ranging) systems used by other companies, giving TuSimple trucks a strategic advantage and allowing them to be efficient but also safe. He states, “While Lidar is also a component of our system, it is our camera-centric perception technology and computer vision capabilities that have allowed us to achieve the farthest range deployed today in any autonomous vehicle: 1,000 yards of high-quality visibility.”

The company’s trucks combine this perception technology with high-definition routing maps to guide them. According to Brown, “This technology is perfect for heavy-duty trucking, particularly long-haul routes that go from distribution center to distribution center and repeat that route over and over. So it can't do a random pick-up in Des Moines and a random pick-up in Jacksonville. Think of it like railroads for the future. The truck can only go where we map it to go.”

One of the biggest benefits, he says, is that the system is always at optimal performance. “It never gets sleepy. It never texts. It never gets intoxicated or impaired in any way. It can drive 24 hours a day, 365 days a year.”

Autonomous Trucks Offer New Opportunities for Drivers
A recurring concern is that technology could displace human drivers. But Brown says that a person will have to interact with TuSimple’s vehicles for the foreseeable future. To address this concern head-on, TuSimple and Pima Community College collaborate to launch the first “Autonomous Vehicle Driver and Operations Specialist” certificate program for truck drivers in September 2019. The program builds on their trucking knowledge and will allow them to upskill as the trucking industry evolves, preparing them for new jobs such as training autonomous systems as test drivers, operating the vehicle in situations where autonomous driving is not suitable and remotely monitoring the system from a command center.

Learn More at WCX 2020
Brown will be speaking during the Automated Trucks panel discussion at WCX 2020 SAE World Congress Experience, to be held April 21–23 in Detroit. As the largest technical mobility event of the year, WCX brings together mechanical, electrical and software engineers, OEMs, Tier 1 suppliers and R&D professionals to explore the latest automotive technology and regulations and see where the industry is heading. To learn more and register, visit www.sae.org/wcx.