From Science Fiction to On-Road Application: SAE J2954 and SAE TIR J2954/2 are the Gateway to Wireless Charging Future up to 500kW 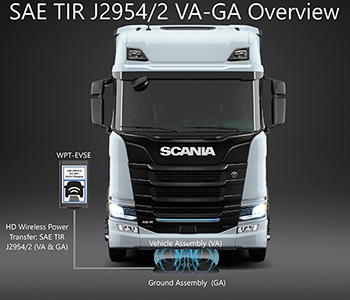 An electric-powered freight truck rolls down the highway, drawing power from its batteries to support both its powertrain and refrigeration of precious cargo kept at a constant temperature. The driver spots a station where it’s possible to fully recharge with conductive charging with an SAE J1772 heavy cable, but that means an overnight wait for a turn at the port, just a few miles away.

But there’s another option.

The driver decides to find a SAE J2954/2 Wireless Power Transfer spot, where they can power the truck enough for the sleeper cab to maintain power, their cargo to remain chilled and wake up with batteries fully charged, with nothing to charge except park.

It may sound like a far-off future, but the work that the SAE Wireless Power Transfer (WPT) Task Force makes that reality a lot closer than you might think.

“The future is now for zero emission vehicles,” said Jesse Schneider, WPT Task Force chair and CEO/CTO at ZEV Station. “There is a real opportunity to start commercialization to wireless charging for light duty vehicles and soon thereafter in heavy duty vehicles.”

The SAE WPT task force has been pioneering wireless charging for quite some time, spearheading critical standardization topics. In the previously published SAE J2954 standard, the committee spent more than a decade designing the safe implementation of seamless wireless power transfer for light duty vehicles to 11kW. Now, SAE just released the game-changing SAE TIR J2954/2—a world-first guideline for heavy-duty vehicles charging to 500kW—along with an updated J2954 standard that creates a certification standardization together with UL for light-duty systems, enabling the start of mass production.

What’s more, the SAE WPT Task Force is not only exploring standardization around common frequencies and EMF Safety, but had also done extensive test reports while transferring full power over an air gap of 10 inches (254mm) with 93% efficiency.

“Both static and dynamic on road charging are being co-developed for heavy duty, though high power static charging is further along being used in field trails around the world. Making both possible is what’s being envisioned in SAE TIR J2954/2,” Schneider said.

SAE J2954/2 has also paved the way for states across the U.S. to begin testing this dynamic power transfer technology. In Michigan, Governor Gretchen Whitmer and the Michigan Department of Transportation are already pursuing public road testing, with Florida and Indiana in line to follow, according to Schneider. Globally, there have been cases where this testing is already been implemented.

“Effectively, dynamic charging is about coils buried over a length of road that charge the vehicle while (it is) in motion with a common frequency 85kHz band,” Schneider said. “That frequency and coils are being standardized in SAE J2954/2.  And even though it sounds like science fiction, it’s been applied over a number of years in places in Israel and Europe.” 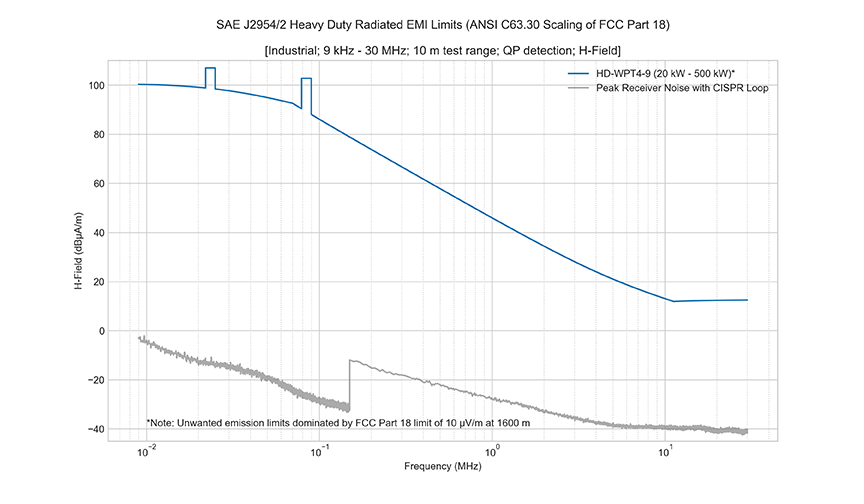 These developments in both static and dynamic charging could have big impacts for electric bus drivers, Schneider said, with the possibility of greatly extending a typical EV bus 100-mile range many times, which already has been shown in field trials. This development is also coming at a time where the reliability of plug-in chargers is being debated—and shows the forward-thinking nature of SAE committee volunteers.

The work of the WPT Task Force allows this technology to be standardized on a global scale, and make sure a vehicle that is designed on one continent can still function in another. The task force consciously sought out relationships to ensure harmonization from ISO, China, the EU, and other global bodies to avoid this diverging standardization.

“There are unfortunately many different types of conductive charging that is not all compatible,” Schneider shared. “We have some really great relationships internationally with a number of different organizations, and we want to make sure there’s one wireless type of charging unit, per power level, wherever you go. The light duty standard SAE J2954 is effectively harmonized around the globe and we intend to do the same with the TIR J2954/2 document”.