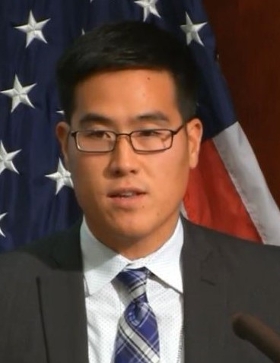 In January of 2022, SAE International’s Government/Industry (GI) meeting once again facilitated important, industry-defining conversations about the future of mobility.

White House National Climate Advisor Gina McCarthy and Secretary of Energy Jennifer Granholm emphasized the importance of industry’s shift to electric vehicles—and SAE’s place at the center of it all.

But those conversations aren’t just reserved for January. Throughout the year, SAE is doing the work, bringing together mobility professionals who are working on building our future.

David Liu, Regulatory Safety Manager at Honda, is one of those professionals who is a key contributor to these conversations and the work SAE does. Liu first became involved with the GI event when he assumed his role in regulatory safety affairs and has found the connections facilitated by SAE essential for the work he does as industry moves into unknown territory.

“The role that vehicle technologies play in achieving safety is being entirely redefined and is a major component of the unprecedented transformation of the auto industry,” Liu said. “The GI meeting is the only event of its kind that gathers stakeholders at the critical intersection of technology and policy. GI meeting organizers are deeply embedded in this space and help identify what the critical questions are and convene key players to ensure that advancements in technology and policy keep pace with each other.”

“Traditionally, passive safety systems like airbags and seatbelts have very good consumer acceptance because they don’t interact with occupants until the vehicle is in a crash. Today’s active safety systems are just that – they are actively assisting the driver to avoid collisions, operating much further upstream of the crash event,” Liu said.

“Of course, we want active safety systems, including increasing automation, to perform as safely as possible. However, if that performance is annoying to consumers, they might simply turn them off and eliminate any potential safety benefits. This conversation is more important than ever as we look at ways that active safety systems can further address drivers upstream of the crash, especially in light of record surges in U.S. traffic fatalities that are largely attributed to risky driver behavior,” he added.

Interested in working with professionals like Liu on solving the tough issues? Join us in Washington, D.C., Jan. 17-19, 2023 for our next Government/Industry Meeting, and keep the conversation going year round as an SAE International Member.