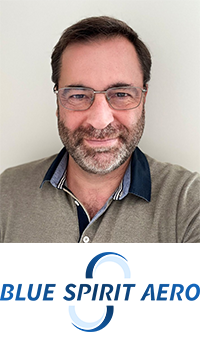 Last week, SAE International connected with professionals from around the world at the World Hydrogen Congress in Rotterdam, The Netherlands, leading discussions around hydrogen as a fuel source for mobility.

Oliver Savin, Blue Spirit Aero Founder and CEO and Chairman of the joint SAE/EUROCAE Standardization Committee on Hydrogen and Fuel Cells for Airborne Applications, joined an SAE-moderated panel on Airports as Energy Hubs to offer his perspective.

We caught up with Olivier after the event to gain his vision on next steps. Check out our conversation below.


SAE International: How does the concept of Airports as Energy Hubs work—and where does hydrogen fit into this conversation?

Olivier Savin (OS): As centerpieces of the global transport of people and goods, airports have become more than platforms dedicated only to the traffic of aircraft. They now often materialize active local economical nodes at the crossroad of various communication and transportation networks.

The Airport as an Energy Hub is a natural extension of this dynamics, where some of its unique specificities (large unused land areas next to the runways, existing and efficient means of transportation connecting it to urban areas, highly trained technical staff, expertise with handling various energy carriers,...) are being exploited to make it a centralized energy ecosystem which can support an energy production, storage and distribution infrastructure in a context of increasing sustainability needs.

Hydrogen energy represents the ideal central component of this scheme, as it can be produced locally via renewable energy sources installed within the airport premises, efficiently stored during long periods of time, and easily distributed to various stationary or mobility applications.

SAE: What key elements came out of the conversation at the World Hydrogen Congress around this idea, and how are you applying them to your work at Blue Spirit Aero?

OS: One of the key topics discussed around this idea is related to the fact that tomorrow’s hydrogen aviation is actually taking shape today. And it is understood that it is starting with the light aviation sector, which mostly relies on small regional airfields.

Secondary airports are therefore now being seen as prime locations for the deployment and the sharing of hydrogen refueling capabilities. Such airfields are intended to play a major role in the complex equation combining climate challenges of the aviation sector, economical constraints of the operators, and land use planning issues.

In this scope, Blue Spirit Aero intends to develop light hydrogen aircraft (4 seaters) and commercialize them for a rapid market entry. The operation of these small aircraft will require refueling stations of limited size, which can be portable (plug-and-play containers). Such solutions make it possible to establish early on a first hydrogen refueling network at regional airfields, and thus greatly limit initial investments.

SAE:  As Chairman of the joint SAE International/EUROCAE Standardization Committee on Hydrogen and Fuel Cells for Airborne Applications, what next steps do you see for industry in this area—and how is this committee leading the charge on developing more alternative fuels?

OS: A key condition to allow for the hydrogen aviation to be widely deployed and accepted is the proper certification of airborne hydrogen solutions to be within reach.

To allow for this, standardization has a key role to play, and adequate standards need to be put in place in due time. This is what the joint SAE/EUROCAE working group on fuel cell and hydrogen technologies is striving to achieve.

In this effort, it is natural for the committee to first contemplate hydrogen-based solutions which are already proven in other sectors, so as to facilitate the instruction to be conducted during the certification process.

That is why a current focus is being made on gaseous hydrogen, as the related production, storage and distribution technologies are more mature and more extensively normalized than for liquid hydrogen.

More generally speaking, the committee fully recognizes the need the industry has to prepare for the upcoming new aviation, as major upheavals have appeared in the last years: new societal constraints, new market demands, new policies, new technologies, new missions in aerial mobility... A common denominator of all these considerations is the question of the energy source to be used to power the aircraft.

That is why the committee has initiated a thorough work, in close liaison with SAE International’s SAFSG (Sustainable Alternative Fuels Steering Group), whose role is to pin down standards needs for SAF and hydrogen utilization in aerospace, and devise roadmaps enabling their development within concerned committees such as the AE-7F Hydrogen and Fuel Cells committee, as well as other committees as appropriate.

Interested in joining Olivier in exploring the possibilities of Hydrogen and Fuel Cell applications? Learn more about our Aerospace Standards Committees here.