Racing is for everyone.

It’s that simple yet powerful idea that drives the work that Racing Pride does and inspired co-founder Richard Morris to pursue the organization’s mission to positively promote LGBTQ+ inclusivity within motorsports.

“The whole issue in motorsport and the automotive industry was that we weren’t having these conversations on any level,” Morris said. “I really believe that there are lots of very supportive people in our industry who want to make an inclusive environment and want to make things better, they just haven’t known how to start those conversations.”

Morris got his start in the sport in kart racing at age 12 and observed a lack of LGBTQ+ representation and inclusion early in his career. He progressed through the sport as a driver in Formula Ford before moving into sports prototype cars, and is now a works driver for Revolution Race Cars, but found as he transitioned into different environments that he wasn’t sure if his personal identity would be accepted. 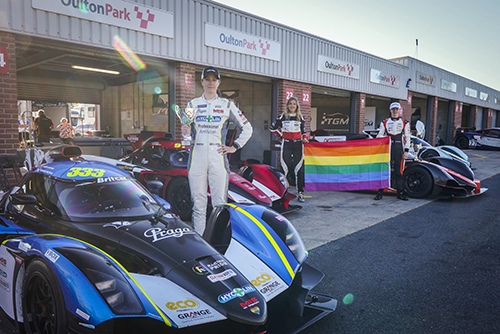 “When I was getting into karting and going into my teens, I was starting to realize that perhaps I wasn’t straight and I wasn’t going to fit this same type of image as I’d seen from drivers that I’ve looked up to,” Morris said. “And at the same time, I think around paddocks and in motorsport environments you often get very casual use of language that isn’t helpful—you know, people negatively throwing around the word gay and all sorts of other words that are much worse—and it made me wonder if I could be myself in this kind of environment.”

As Morris began to come out as a teen in his personal circles, a few poor interactions with fellow racers kept him mostly closeted in the racing world. But as other sports started to encourage more conversations around LGBTQ+ rights and Morris started coming into his own in the sport, he started to feel he could have more of a voice.

As he started having conversations within his own teams, he was pleased to find supportive crew members who simply needed more education on these issues. The experience and lack of visible queer role models in the space inspired Morris to start Racing Pride in 2019.

What started as a passion project in the UK has expanded internationally in the past three years. The organization has landed big industry partnerships with the likes of the BWT Alpine F1 Team and the Aston Martin Aramco Cognizant Formula One™ Team, and has driver and industry ambassadors across Europe and North America. 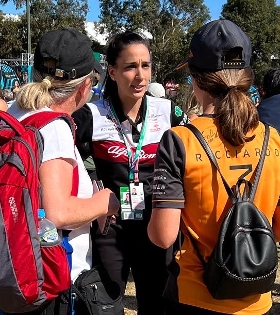 Krystina Emmanouilides, CFD Development Engineer at Alfa Romeo F1 Team ORLEN , is one such ambassador who found the organization after a friend shared an article with her about another industry ambassador.

“As a gay woman working in Formula 1, I thought this was absolutely fantastic—I had heard many stories about others not feeling comfortable enough in the F1 environment (on and off the track) to be openly LGBTQ+,” Emmanoulides said.

Joining early on in Racing Pride’s activities, Emmanouilides had the opportunity to see the group grow, going from being the only engineer in F1 involved with the organization to having representation from multiple F1 personnel. The visibility has allowed her to engage in training course with industry partners, share the LGBTQ+ perspective with allies, and have a collective that can help take some of the anxiety out of being vocal about the LGBTQ+ experience.

“I am extremely proud to work in F1—a childhood dream come true—and equally proud to be an open member of the LGBTQ+ community because I know me being there and being visible can help other members of the community fee safe in the motorsport space, but also because my being there is normalizing relationships with a member of the LGBTQ+ community with other people who may never have had that experience before,” she said.

NASCAR ambassador Ryan Hines is a recent addition to the ambassador team after Racing Pride’s North American expansion in early 2022. As a public relations professional in the sport, Hines has served multiple teams and currently works with David Gilliland Racing in the NASCAR Truck Series. 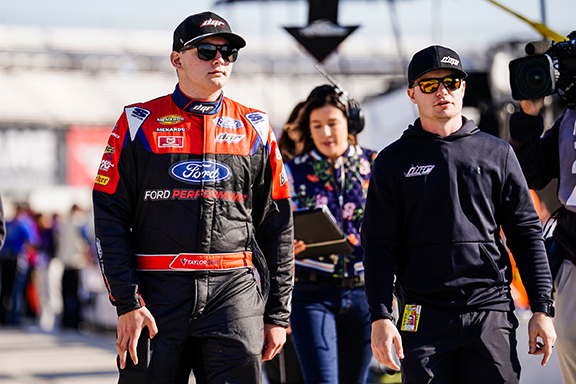 “Going into a sport like NASCAR, you don’t really know what to expect being out,” Hines said. “I think NASCAR has always been seen as this southern, white, straight male sport and that there’s not much room for anybody else. I even grew up thinking that it may not be the space for me because I wasn’t sure that I could be out. And then I got here and honestly, working alongside everyone has been super positive and I’ve had nothing but great experiences.”

Hines has been open about his experience as a gay team member working in the NASCAR community, appearing on multiple media outlets, including as a guest on the NASCAR on NBC podcast. Through that interview, Morris became familiar with Hines, and reached out to see if he would be interested in bringing Racing Pride to the world of NASCAR.

Since becoming involved with Racing Pride, Hines has continued his outreach in the community, even sitting for a television profile with his fiancé—who also works in NASCAR in the cup series—for a feature for NASCAR on Fox. The sport’s increased inclusion of queer voices is a promising development in Hines’s eyes.

“NASCAR has done a really good job so far at continuing to try to get better because they understand what the stigmas are and what people think NASCAR is, and they work really hard to combat that,” he said. “We’re getting better every day over here, but there’s always still a lot of work to go and a lot of education along the way.”

Racing Pride providing that education is just the start for the organization as it seeks to continue expanding across the sport. Morris has identified growth opportunities to address barriers for LGBTQ+ community members in motorsports, increase the group’s growing representation in the industry, and push for meaningful policy changes that will protect queer folks.

“In all roles within the sport, anyone can be a part of this—whether it’s people working in related engineering automotive sectors, or people directly on race teams,” Morris said. “This is about improving the situation in the sport for LGBTQ+ people, but it’s also about what the sport can do beyond itself and the positive impact that the sport can have. Racing Pride is not an attack on motorsport or the automotive industry. It’s trying to harness the good there is in the industry to move it forward, make it more accessible to more people, and use the platform it has to make some positive change.”