Connectivity is a “massive accelerator” for the efficiency, safety and uptime of a truck, stressed Stefan Buchner of Mercedes-Benz Trucks: “It plays the decisive role for the truck of the future, because it acts like few technologies before.”
Several leaders of global commercial-vehicle manufacturers converged in mid-July for a press workshop to discuss the most pressing technological, logistical and regulatory challenges facing the industry, in advance of the IAA Commercial Vehicles trade show taking place in Hannover, Germany in September. The main topics were familiar—electrification, autonomous operation, connectivity—but the viewpoints insightful, coming from the mouths of those helping to shape how the industry moves forward.

Stefan Buchner, the head of Mercedes-Benz Trucks and responsible for Global Powertrain and Production Planning for Daimler Trucks, discussed the aforementioned trends as they relate to “what matters most in trucks: efficiency, safety and uptime.”

“Intelligence” is one area to further explore for more efficiency. “We already support our drivers today with Predictive Powertrain Control (PPC), where the truck proactively brakes and accelerates. So far, this is only possible on highways and major roads,” Buchner said. “A next possible step would be for the truck to process high-resolution road maps to use PPC in the inner city as well. Or imagine the truck recognizes traffic signs and engages the appropriate shifting strategy.”

Of course, alternative drives are also part of Daimler Trucks’ efficiency equation. But hybrids are not high on Buchner’s list.

“We still don’t see a hybrid truck in there, because with our diesel engine we’re already in a similar range of fuel savings and thus CO2 reduction. In purely economic terms, this pays off much more for our customers,” he said.

Full electric is quite another story: “We’re fully concentrating on the electric truck,” Buchner said. “[With] our eActros innovation fleet, the first vehicles are certified and we will be able to report on them by the end of the year.” 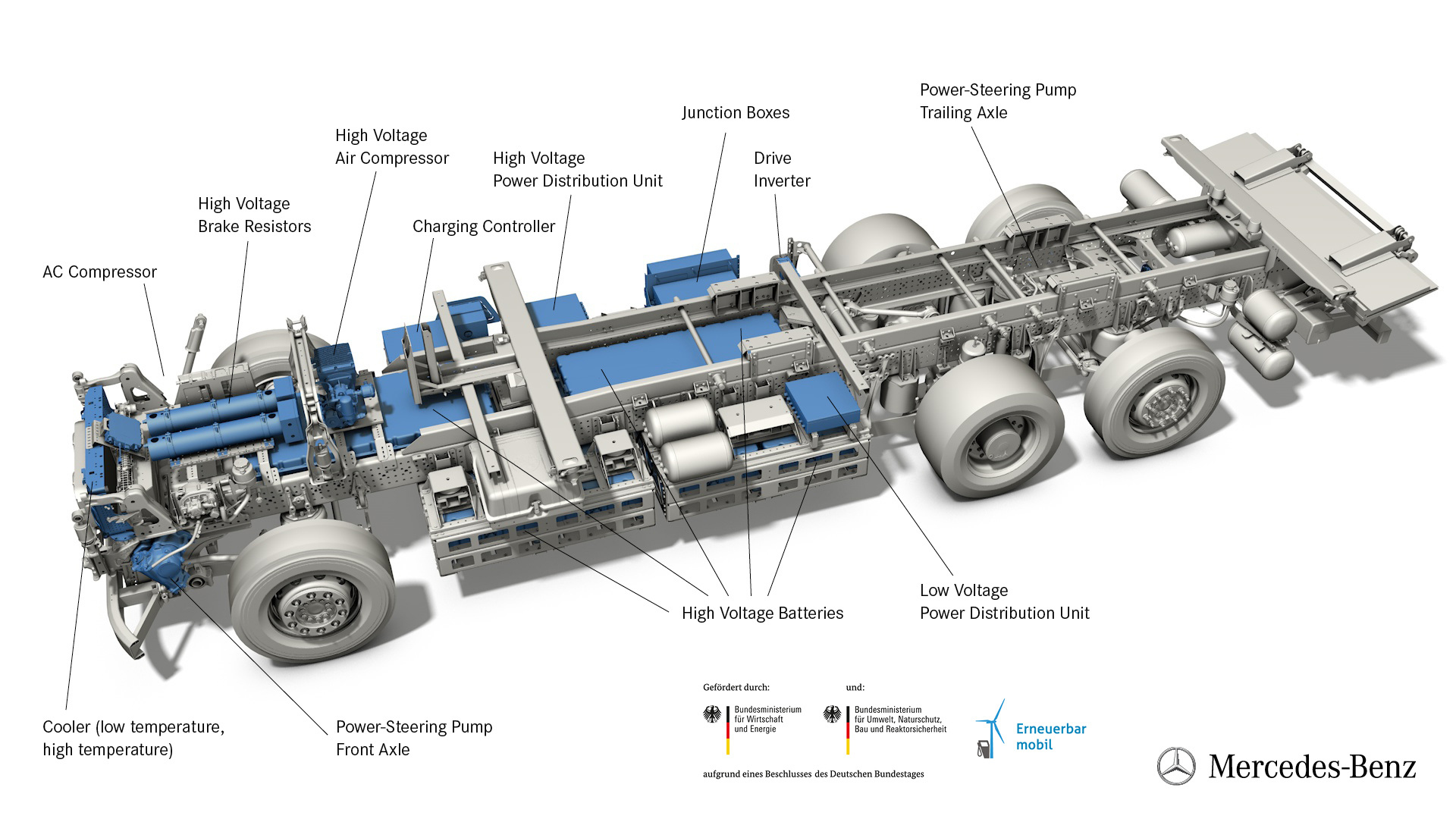 Designed for the heavy-duty distribution sector, the eActros has a range of up to 200 km (124 mi) with the customary level of performance and payload. (image: Mercedes-Benz Trucks)

Two other executives, from Iveco and Scania (a Volkswagen company), outright stated that their IAA booths in Hannover will consist only of non-diesel vehicles—hybrid, electric, CNG, LNG and biomethane.

“Diesel remains important, but at IAA we will show that we have good alternatives up our sleeves. Why? The answer is simple—the pressure on diesel is increasing more and more as cities ban diesel engines from their centers,” said Pierre Lahutte, Iveco Brand President. “There is no panacea...We need an energy mix which meets the requirements of the various applications.”

Andreas Renschler, CEO of Volkswagen Truck & Bus, soon to be known as Traton Group, agrees: “The changes we face are too large and too complex for us to expect a new one-size-fits-all approach as was the case up until now with diesel-fuel vehicles.”

So-called e-fuels—gaseous or liquid fuels generated on the basis of renewable energies—are an area worth further exploring, Renschler said: “In terms of both availability and political support, we are not yet where we want to be and, in my view, need to be.”

“Level 2 of automated driving is definitely possible in the next generation of trucks,” said Buchner.

A world premiere in this regard is coming soon, teased Daimler board member Martin Daum. “Completely driverless will take a long time,” he said, not because it’s technically infeasible but rather due to other challenges related to regulations, social acceptance, etc.

With increased automation comes the question of the driver’s role in the future.
“Today we can brake much more safely, automatically, than a person can, and we accelerate more efficiently,” Daum said. “The greatest challenge is the many unforeseen events that can happen on the road where a human by far is the best computer that you can have in a vehicle.”
The occupation of the driver will change, Renschler asserted. “We will have ‘pilots’ who certainly will remain in control of the system but have different tasks in terms of logistics, optimized load, unloading...Drivers will be there for the next decades.”

Further increasing the uptime of commercial vehicles also is best accomplished through the intelligent (there’s that word again) use of data, according to Buchner.

“When software updates are necessary, we can already install some of them using ‘Flash over the Air,’” he said, referencing the Mercedes-Benz Uptime system. “This ‘live update’ via WLAN could be used for much more in the future. For example, to automatically program in maximum speeds when crossing the border, or to disable stolen vehicles.”