Alternative topping cycles could use piston engines or pulse-detonation combustors. Up to six nutating disc modules are arranged around the cores of these engines to provide a continuous flow of exhaust gasses into the downstream turbines. To further enhance the potential performance of such 2050 generation engines, the nutating disc modules can be combined with intercooling, secondary combustion, and systems using the core exhaust heat to drive bottoming cycles. These varied combinations could all significantly reduce fuel consumption. 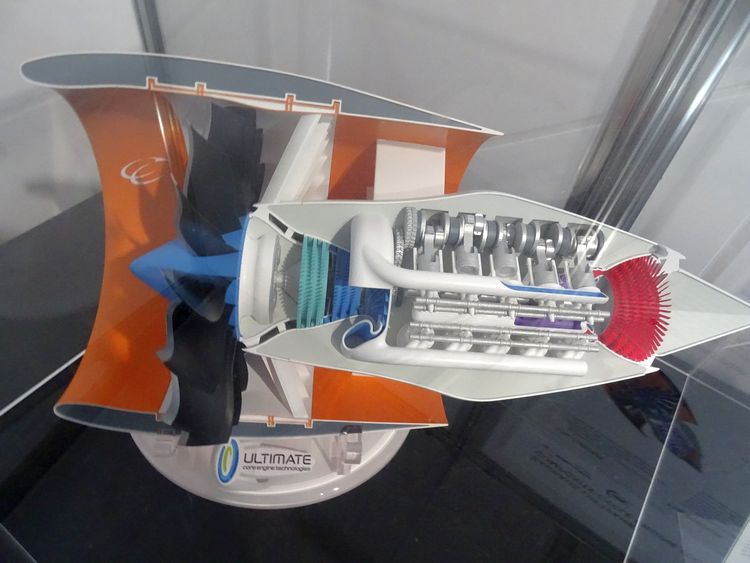 Bottoming cycles extract extra energy from the exhaust heat. Open circuit cycles heat some compressed air and generate power by expanding it through a turbine. Closed circuit systems use different working fluids but they have to be cooled before they are recirculated. Supercritical CO2 gives more compact and efficient bottoming cycles than air or steam turbines but there are also possible disadvantages that might result from increased weight and drag from an air-cooled pre-cooler. The use of nutating discs in machines designed to produce optimum efficiency could replace core components in future open rotor or geared turbofans.

Studies and investigations undertaken by Aristotle University and MTU aero engines focused on intercooled recuperation with Secondary Fluid Recuperators (SFR). In this concept, two heat exchangers are installed in the engine: one in front of the combustor and one downstream of the Low Pressure Turbine (LPT), connected by an internal closed circuit using a secondary working fluid. Heat is transferred by the SFR from the exhaust hot gas region after the LPT to preheat the cold air before the combustor. This is aimed at reducing fuel consumption and emissions. 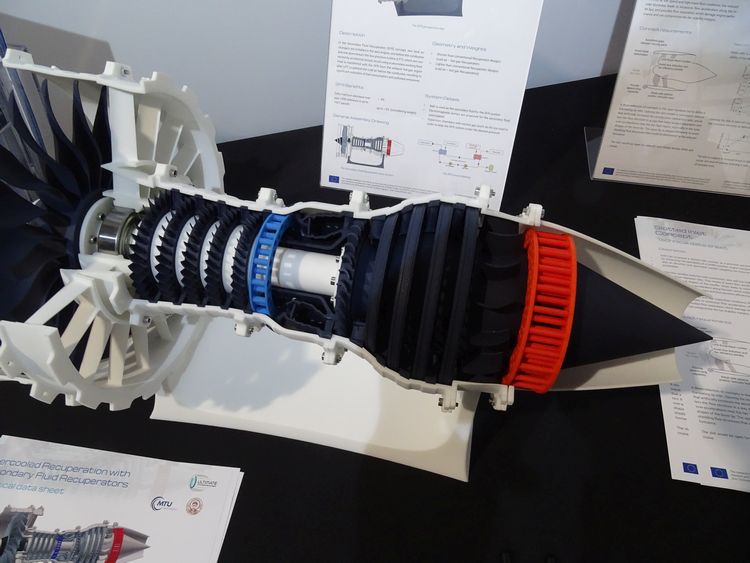 The forward open rotor would sport six boxprop blades used to supress the blade tip vortex. The rear open rotor would comprise ten high-speed blades. A bypass duct is used for intercooling with a bypass ratio of one. The engine would be of a two-spool configuration with high-speed and low-speed shafts.

Bauhaus Luftfahrt and MTU investigated the Composite Cycle Engine (CCE), which looks to be the most potentially complicated design as it combines a gas turbine with a piston engine. This is a very radical concept that replaces the gas turbine’s core with piston components. The piston engines increase thermal efficiency by using nonstationary isochoric-isobaric combustion, which enables higher peak pressures and temperatures within the core engine. 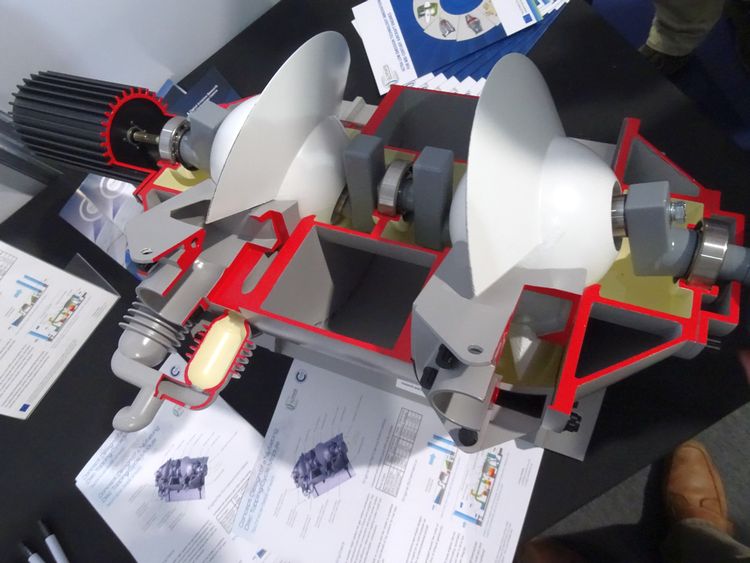 In the design studied, the two banks of V-10 piston engine motors power the high-pressure shaft and there is no high-pressure turbine, or power or bleed-offs. The piston engine is connected with the HP spool and powers the axial-radial HP Compressor and the LP system is similar to that in a geared turbofan architecture. It allows the outstanding power-to-weight ratio of the LP turbines to be utilized fully and an ultra-high bypass ratio to be realized. This CCE concept could be capable of delivering a 50 percent fuel burn improvement compared to Year 2000 baseline turbofan technology. The engine nacelle would be compact.

Working on the Ultimate project with French aero engine company Safran, ISAE has proposed a slotted engine inlet concept that might improve operability margins of an Ultra High Bypass Ratio turbofan, enabling it to be contained in an ultra-thin and ultra-short nacelle. It aims at mitigating flow separation and distortion effects on the fan by artificially increasing the aerodynamic contraction ratio at low-speed and high-incidence conditions.

By closing the slotted intake in the cruise mode, a smoother nacelle shape would result, bringing reduced drag and improving fuel burn performance. This would bring the most benefit to new engines destined for future long-haul aircraft. The concept requirements included looking closely at many potential gains from new inlet designs including reducing efficiency losses at the fan face, avoiding or limiting gaps between moving parts, shielding approaching fan noise, and providing a deicing capability. Other investigative activity at ISAE included computational aero-acoustic simulations into noise propagation from an open rotor engine in isolated and installed configurations to establish the benchmark for the noise-reduction potential of the boxprop continuous blade concept.

There can be little doubt that these advanced research studies could provide valuable pointers to how gas turbine technologies might be further stretched over the coming decades, while emerging hybrid and all-electric propulsion solutions progress alongside new materials and associated new manufacturing capabilities. There is room for both pathways to co-exist as the factors that will decide the rate of application in production form will, as ever, depend on in-service reliability, profitable operation, ease of maintenance, and ultimately, customer acceptance.

Richard Gardner is an experienced public relations consultant, author, and editor, specializing in aerospace, defense, and transport as well as high-tech industry. Read more from Richard Gardner on SAE.org.


Working on aerospace systems and platforms? Wrestling with challenges? Have aerospace wisdom to share for the greater good of the industry? You're invited to get involved with SAE International -- contact courtney.howard@sae.org to contribute and add your voice to the growing body of knowledge.
Continue reading »
The search for ever-lower emission technology for future generations of aircraft engines is actively progressing on both sides of the Atlantic.