Because of the limited amount of material quantity, ZwickRoell readily helped KRP Mechatec develop a special fixture, which pushed past the original equipment’s limit of -150°C and allowed simultaneous materials testing to be performed efficiently and economically.
Materials research and development frequently require materials to be tested at different temperatures, in line with their eventual area of use. For aerospace materials, that could mean a wide range of operational temperatures.

The ZwickRoell AllroundLine testing machine operates with an alternating current drive that requires extremely low maintenance when compared to large hydraulic drives and associated fluids. The AllroundLine attains maximum forces up to 250 kilonewtons in the tensile and compression directions and constant velocity characteristics at very low speeds.

The temperature chamber is designed for temperatures between -80°C and +300°C, but can be used down to -150°C with liquid nitrogen to simulate the below-freezing-temperatures found at commercial airline cruising heights. The high-temperature furnace operates from 200°C to 1,600°C, with is a choice between one- and three-zone versions and an air or vacuum environment. Temperature this high could reflect the temperatures that occur in and around aerospace turbines.

Strain measurement for all the above temperature ranges is handled by a non-contact laserXtens extensometer consisting of two measuring heads with digital cameras and laser light sources mounted on motorized carriages. This laser-optical method eliminates the need for material specimen marking in tensile tests, and instead uses light-generated virtual gauge marks on the material, the movement of which is tracked in real time.

This testing envelope is suitable for a wide variety of applications, such as tensile, compression, and flexure testing to determine aerospace material heat resistance, re-crystallization temperature, and thermo-elastic behavior.

Among the organizations taking advantage of this flexible testing system is KRP Mechatec GmbH of Munich, Germany. KRP Mechatec uses a ZwickRoell AllroundLine testing machine for testing additive manufactured aluminum and titanium structures for space launch vehicles at temperatures as low as -269°C.

The liquid hydrogen fuel tanks aboard launch vehicles need to hold fuel at a stable temperature of -253°C while being subjected to extremely high loads during take-off. Additive manufacturing methods such as laser melting afford a great amount of design freedom and therefore offer huge potential for weight minimization – one of the most important issues regarding launch vehicles. 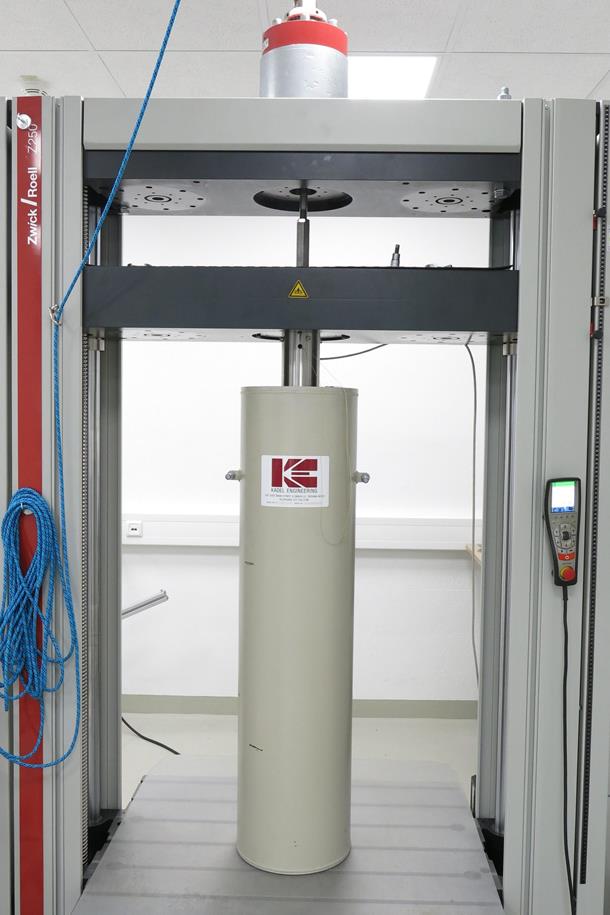 
The objective of the test program at KRP Mechatec is to maximize the potential of lightweight construction for additive manufacturing while maintaining fuel tank structural integrity.

Because of the limited amount of material quantity, ZwickRoell readily helped KRP Mechatec develop a special fixture, which pushed past the original equipment’s limit of -150°C and allowed simultaneous materials testing to be performed efficiently and economically.

Tensile, compression, shear, and hole-widening tests were all performed in a cryostat pre-cooled to -196°C using liquid nitrogen and then cooled to a final temperature of -269°C with liquid helium.

Continue reading »
Because of the limited amount of material quantity, ZwickRoell readily helped KRP Mechatec develop a special fixture, which pushed past the original equipment’s limit of -150°C and allowed simultaneous materials testing to be performed efficiently and economically.