In recent years, Arm processors have made a quiet, understated entry into the aerospace and defense market. With a well-established reputation in commercial markets for bringing high performance to low-power mobile devices, such as smartphones, tablets, and wearables, it’s no surprise that Arm ’s potential was recognized in an industry where size, weight, and power (SWaP) constraints heavily influence technology selection.

Arm, once an acronym for Advanced RISC Machine, employs reduced instruction set computing (RISC) to decrease cycles per instruction, which in turn lowers the processor’s power consumption and dissipates less heat. Consequently, Arm architectures deliver an unparalleled power-to-performance ratio to meet the requirements for many aerospace and defense applications.

Even so, Arm chips are far from ubiquitous in the mil-aero industry, a world that has been long dominated by Intel and Power Architecture processing units. These incumbents offer rugged processors that are optimized for maximum performance, have been implemented in boards with a minimal physical footprint, and have been proven to maintain reliability in harsh environments. What’s more, because Intel and Power Architecture processors have powered many avionics systems to date, a variety of these chips provide the service history and design artifacts required for DO-254 certification. 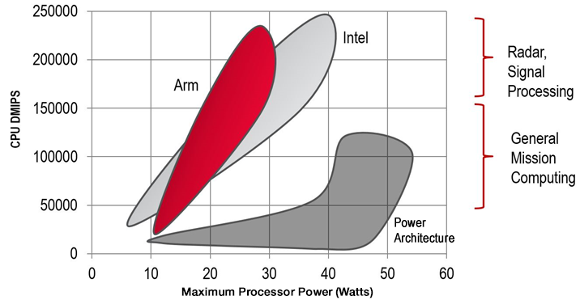 A previous white paper explored in depth why Arm processors are ideal for aerospace, defense, and rugged embedded applications. But, with a SWaP-friendly nature and proven history in commercial technology (Arm Limited reports 50 billion chips were shipped from 2013 to 20172), do Arm processors have what it takes to meet the highest DO-254 requirements?

Power Architecture processors also use RISC to provide low-power computing, and those manufactured by NXP have been proven in a wide range of DO-254 safety-certifiable applications, both commercial aerospace and defense, often to the highest design assurance level (DAL). But with no NXP Power Architecture devices planned for introduction after the currently released QorIQ T-series of products, this landscape is set to change in the future.

In particular, the absence of new Power Architecture offerings creates an opportunity for both Arm and Intel, especially in programs with DO-254 requirements. The selection process for embedded computing technology in these safety-certifiable programs has typically prioritized reliability and determinism, which made Power Architecture processors’ non-throttling performance an ideal fit. Now, with computing technology evolving at a more rapid pace than in the past, performance has become another key criterion.

Evaluating determinism, Intel processors have a disadvantaged reputation compared to Power Architecture. Intel processors are known to throttle their clock speed (and thus their performance) based on the processor workload and their thermal environment. This is done automatically to reduce power consumption and protect the hardware from overheating if not adequately cooled. However, for demanding defense applications where predictability is essential, Intel processors can be set to constant clock speeds. Furthermore, choosing boards engineered with advanced cooling techniques and designed to ensure consistent performance is essential. (For more on this subject, read “Understanding Intel Processor Throttling for Defense Applications”.)

Arm and Power: Cut from the same cloth
When it comes to manufacturing, Arm processors bear another similarity to Power Architecture that make them a prime candidate to fill the void in the DO-254 certifiable hardware space. With IBM introducing its last series of general-purpose Power Architecture processors in 1997, NXP secured its spot as the leading producer in the market. Now with decades of experience and expertise designing chips for a variety of applications, including DO-254 DAL A certifiable hardware, NXP has increased its focus on delivering Arm solutions that meet the demanding requirements of these applications as Power Architecture solutions have, with even higher caliber performance.

Not all cores are created equal
In order to understand Arm’s fit in the DO-254 world, it’s important to note there are three types of Arm architectures:
For DO-254 safety-certifiable applications, it’s logical to assume that Cortex-R series cores would offer the ideal profile. However, while there’s nothing inherently preventing Cortex-R and -M cores from meeting DO-254 requirements, A-profile architectures in fact provide the best solution for avionics. Cortex-A cores offer the only profile that can run a 64-bit operating system, and provide the level of performance needed to handle the workload and computing requirements of avionics systems.

Not only is this balance between power and performance ideal for managing both the workload and SWaP constraints of airborne systems, the Cortex-A53’s proven service history provides the reliability required for DO-254 certification. Its deterministic processing prevents throttling in challenging mil-aero environments, ensuring consistent levels of performance for safety-critical systems with DAL A requirements, such as flight control computers.

Establishing compliance to the safety requirements outlined in ISO 26262, which prescribes functional safety standards for road vehicles, involves assessing failure modes and testing hardware in a variety of environmental and operational conditions. Interestingly, many areas of the ISO26262 ASIL assessment process align with the hazard analysis and safety assessment requirements for DO-254 certification. This credible experience in safety-critical applications has provided NXP a solid foundation for turning its Arm focus to the skies.

The power of collaboration
On the path to being deemed airworthy, the collection of data artifacts to support DO-254 typically starts at the board level, especially with some hardware vendors now offering to deliver commercially designed boards with data artifact packages for certification. This is where NXP’s experience providing evidence to support certification for its Power Architecture products is again beneficial in its Arm offerings.

Working with NXP from the start of the design process, hardware vendors determine which processor delivers the performance and reliability required for a board’s target applications. Often these applications call for specific system-level protections that require additional logic built into the processor to achieve them, necessitating a level of familiarity with the product only NXP can provide. NXP’s transparency and collaboration with hardware vendors enables such modifications.

Furthermore, a variety of hardware tests required for DO-254 compliance must test functions that originate within the processor itself and are, therefore, difficult for board manufacturers to conduct on a finished chip. NXP provides documentation from the processor’s design, development and manufacturing stages that allows board manufacturers to demonstrate adherence to DO-254 requirements without the complex and time-consuming undertaking of conducting these internal tests themselves.

This partnership and collaboration played a key role in Curtiss-Wright’s development of what would become the industry’s first announced DO-254-certifiable Arm SBC, the LS1043A-powered VPX3-1703. Leveraging four Cortex-A53 cores, along with cybersecurity and real-time debug features, the LS1043A has layers of reliability built into its specifications. Delivering the output and processing levels demanded by most DAL A applications, the VPX3- 1703 balances deterministic, high performance with SWaP-friendly power consumption, and a reputable service history with a design for longevity. Having worked closely with NXP throughout the development phase, Curtiss-Wright is able to deliver a full DAL A certification artifacts package with the VPX3-1703.

Conclusion
Reliability and determinism have always been the paramount criteria in the selection process for DO- 254 certifiable avionics. As commercial technology has rapidly evolved, yielding even higher output from increasingly shrinking form factors, performance has emerged as another key factor for evaluation – especially since building with the best technology today can add longevity to a program by (theoretically) extending the time between required upgrades.

With no roadmap on the horizon for Power Architecture devices, Arm is a prime candidate to become the new leading processor architecture powering DO-254 DAL A-certified computing modules. Boasting higher performance capabilities than Power Architecture at lower levels of power consumption, Arm offers an unbeatable power-to-performance ratio to bring substantial outputs to SWaP-constrained environments. In particular, Cortex-A processing cores like the Cortex-A53 provide the ideal performance and power levels for mil-aero applications, and have a reputable service history to support DO-254 certification. 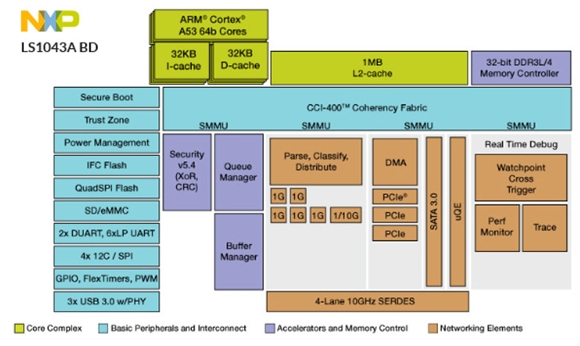 Further establishing Arm as a viable alternative to Power Architecture, NXP is devoting the expertise that made it the leading provider of Power Architecture processors toward Arm products. With a breadth of experience designing high quality processors and supporting board manufacturers on the path to DO-254 certification, NXP’s background in helping Power Architecture-based boards meet DAL A standards primes it for the same success with Arm. And, as a key player in safety-critical automotive systems, NXP has already manufactured a variety of ARM cores compliant with stringent safety regulations that provide a solid foundation for DO-254 certification.

Ultimately, the Arm processing architecture seems ready for take-off in the aerospace and defense industry, and it won’t be long before Arm establishes its spot as a key player in DO-254 applications.

Geoffrey Waters, Senior Systems Engineer, NXP Semiconductors
Geoff Waters serves as a Distinguished Member of Technical Staff, covering high-end multi-core products and trusted computing for the Digital Networking group. He leads the Trust Architecture user’s group, and is a regular contributor to the MultiCore for Avionics (MCFA) working group. When Geoff is not working on security acceleration and hardware roots of trust, you'll find him on the river competing in canoe ultra-marathons and kayak races.

1 Note: CPU DMIPS for Intel includes processor only and excludes the PCH
2 https://community.ARM.com/processors/b/blog/posts/inside-the-numbers-100-billion-ARM-based-chips-1345571105
3 Apple is a trademark of Apple Inc., registered in the U.S. and other countries

Continue reading »
The selection process for embedded computing technology in safety-certifiable programs has typically prioritized reliability and determinism, which made Power Architecture processors’ non-throttling performance an ideal fit. Now, with computing technology evolving at a more rapid pace than in the past, performance has become another key criterion.