“The Zephyr S aircraft is demonstrably years ahead of any other comparable system and I am beyond proud of the Airbus team for their unrivalled success. We have created a new future for stratospheric flight.” -- Airbus Defence and Space CEO Dirk Hoke
Richard Gardner reports on the growing pace of activity and interest in High Altitude Pseudo Satellites (HAPS). The concept of using a high-flying, unmanned, solar-powered air vehicle, to provide persistent services that previously could only be enabled by using space satellites, has been featured before but now the momentum has moved up several notches as aircraft enter the production phase, and with growing competition entering this all-new market.

Farnborough International Airshow 2018 coincided with the opening of the world’s first serial HAPS assembly line by Airbus Defence and Space, with the Farnborough-based facility named after the concept’s inventor, the late Chris Kelleher. Previously the focus of the Zephyr Program has been the building, testing, and evaluation of various research and development prototypes, which have set new world records for unmanned air vehicle endurance, remaining airborne for many weeks. Now the first production Zephyr S aircraft are being manufactured and assembled in a new factory facility alongside the famous airfield, appropriately the home of UK-powered flight since 1908. At the show, Airbus Defence and Space Chief Executive Officer Dirk Hoke held a briefing on progress with the Zephyr program. Several program suppliers subsequently described some of the system features during a visit to the new production line.

The motivation for developing the HAPS solution was originally a QinetiQ R&D project to investigate the practicality of operating an all-electric, solar-powered air vehicle that could fly above 65,000 feet in the stratosphere, well above other air traffic and bad weather, and could fly a pre-programmed flight pattern, or under surface control, harnessing the sun’s rays to provide and store electrical power during the day, maintaining power through the hours of darkness until the solar panels could resume operation. 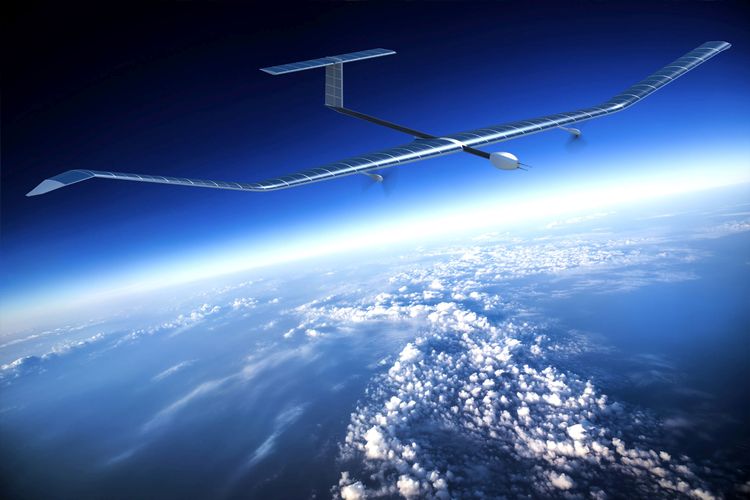 The key to success rests in the combination of an advanced ultra-lightweight airframe, with the solar power panels forming the entire wing surface, a highly efficient and reliable electric power plant, new miniaturized electronic components and materials, and a service pod capable of being fitted with sensors or communications payloads. The potential use of such an aircraft, if it could be shown to be a robust and practical solution, could open new possibilities filling a capability gap while being complementary to satellites, unmanned air vehicles, and manned aircraft. Compared to using small orbital satellites for communications or high-altitude surveillance, the cost of a pseudo-satellite would be far more affordable, flexible in use, and offer a new order of persistence. Two HAPS available in a region could provide continuous coverage indefinitely.

Having proven the concept, the rights to develop Zephyr into an operating system were taken over by Airbus Defence and Space, which is now building a series of production HAPS aircraft for the UK Ministry of Defence. This requirement resulted from a need to provide persistent tactical communications for Special Forces in remote mountainous areas, such as Afghanistan, but the flexibility of the solution in a productionized product opens other possibilities, such as surface monitoring and observation as well as communications in both military and civilian environments.

Zephyr is being built in two versions: Zephyr S, based on the development configuration with a single tail, and the larger Zephyr T, with a twin-boom configuration and larger payload.

Speaking at the Farnborough briefing Hoke said, “The Zephyr S aircraft is demonstrably years ahead of any other comparable system and I am beyond proud of the Airbus team for their unrivalled success. We have created a new future for stratospheric flight.”

The maiden flight of the Zephyr S took place over Arizona in July and is being supported by both the UK and US governments.

Sophie Thomas, head of the Zephyr program at Airbus, added: “It will bring new see, sense, and connect capabilities to both military and commercial customers and will provide the potential to revolutionize disaster management, including monitoring the spread of wildfires or oil spills by providing persistent surveillance, tracing the world’s changing environmental landscape, and will be able to provide communications to the most unconnected parts of the world.” 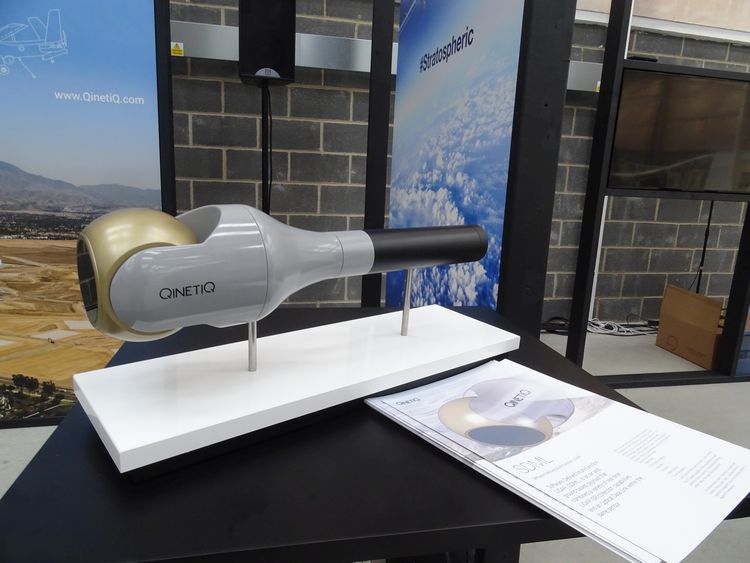 Maritime surveillance, border patrol missions, and navigation services are all likely to provide important future markets for Zephyr. Its promoters and major system suppliers say that it fits into an emerging market niche that lies between large unmanned air systems and communications and surveillance satellites, but can provide high-quality performance at a fraction of the capital and operating costs. A broadband communications payload will deliver a similar data capacity as a small satellite and as a surveillance or tracking platform 100 megabytes of imagery can be downloaded per second covering from 30 kilometers (km) to 100km with continuous ground tracking. Data can be distributed via direct transmission or satellite coms link to “daisy-chain” to multiple ground or airborne control centers. For military tactical use, it will provide a very robust, secure, independent link between dispersed forces.

Alongside the Zephyr production line, several suppliers established displays of their systems applicable to the program. Amongst them was SatixFy describing a multibeam broadband communications payload that could provide 30 gigabits per second (Gbps) of data speed, and QinetiQ showing a software-defined, multifunction laser rangefinder and mapping payload (LIDAR SDML) which can switch from intelligence, surveillance, and reconnaissance (ISR) collection modes in the same compact package, including an optical data link. It offers an unprecedented optical sensing flexibility with modes which include rangefinding, 3D imaging and mapping, velocimetry, vibrometry, target marking, covert designation, and covert high-bandwidth optical comms. The 3D mapping capability offers next generation mission planning over the battlefield with greater fidelity and resilience against radio-frequency interference. 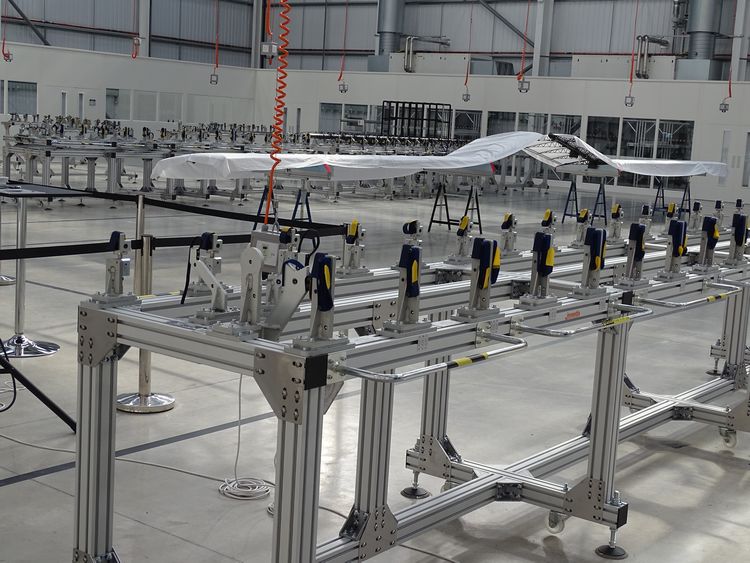 Although Zephyr S has a wingspan of 25 meters and weighs just 75 kilograms (kg). The new Zephyr T model will weigh 140kg. Operating at an average altitude of 70,000 feet, it can stay focused on specific areas of interest, which can be several hundred miles wide, over extended periods without interruption, offering satellite-like communications and observation services with greater image granularity. Payloads are being developed to maximize the potential of this new platform and pointing the antennas, and locating targets, requires a very precise attitude of the platform.

Due to the excessive drift in inertial navigation systems, only a Global Navigation Satellite System (GNSS) can provide the attitude accuracy needed over the duration of a typical mission, which might be up to several months. GNSS attitude determination uses carrier phase measurements to determine the orientation of fixed baselines, which specifies the platform attitude. The performance is a function of the phase measurement accuracy and baseline strength.

The new Airbus algorithm can measure phase with 3 to 10 times better accuracy than current products, giving a better attitude performance for a smaller baseline. This algorithm was developed as part of a UK R&D program and can be optimised for Zephyr.


Richard Gardner is an experienced public relations consultant, author, and editor, specializing in aerospace, defense, and transport as well as high-tech industry. Read more from Richard Gardner on SAE.org.


Working on aerospace systems and platforms? Wrestling with challenges? Have aerospace wisdom to share for the greater good of the industry? You're invited to get involved with SAE International -- contact courtney.howard@sae.org to contribute and add your voice to the growing body of knowledge.

Continue reading »
“The Zephyr S aircraft is demonstrably years ahead of any other comparable system and I am beyond proud of the Airbus team for their unrivalled success. We have created a new future for stratospheric flight.” -- Airbus Defence and Space CEO Dirk Hoke