A new development applicable to the production of the Airbus Zephyr lightweight, solar unmanned aircraft is the Airbus Spider radar payload, a novel commercial off-the-shelf (COTS)-based payload designed specifically for ship detection, location, and tracking. It uses Zephyr’s low velocity and high-altitude operation to deliver highly efficient and persistent regional coverage. It is complimentary to and can provide cueing for other maritime sensors.

A proof-of-concept campaign, including an airborne demonstrator, is underway to test Zephyr’s X-band radar. This pod-mounted payload weighs just 5 kilograms (kg) with an antenna size of 0.2 meters x 0.2 meters (m) and has 1m resolution. Another potential radar payload for the Zephyr T is the Marlin, a multimode imaging radar weighing 20kg. 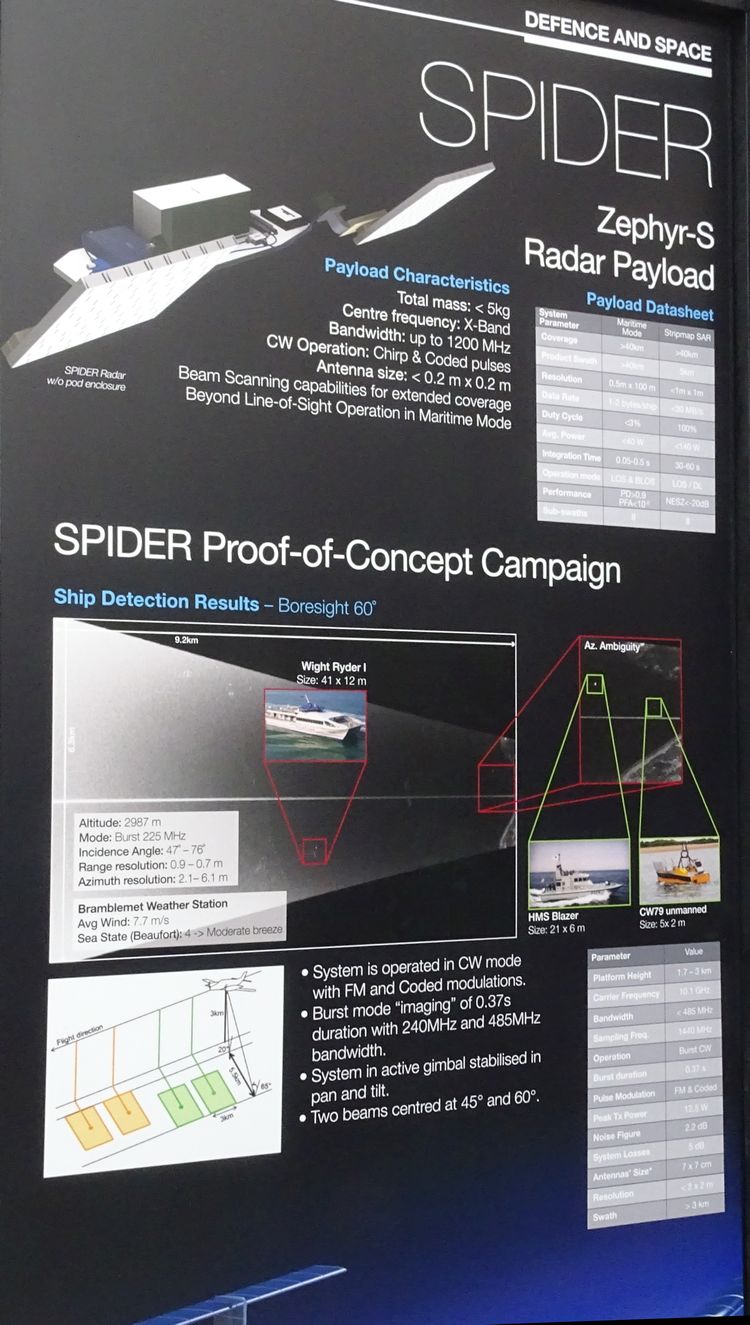 The new Airbus Zephyr facility in Farnborough, England, is more than just an assembly building. It houses the administrative headquarters for the program and includes a presentation suite, overlooking the final assembly hall, complete with displays describing the project in detail and showing key design features in component form as well as in graphic displays. Little doubt the future potential of this HAPS initiative is set to be given a strong boost by this investment.

Airbus is to set up a new Zephyr operating site at Wyndham in Western Australia which has been chosen for the first launch and recovery site mainly due to its largely unrestricted airspace. Operational UK sites will be chosen later but the intention is MOD-owned Zephyr aircraft will be transportable in a manageable package so that they can be flown where needed in the world in a C-17 or A400M, with compact support equipment, ready for quick assembly and flight operations. 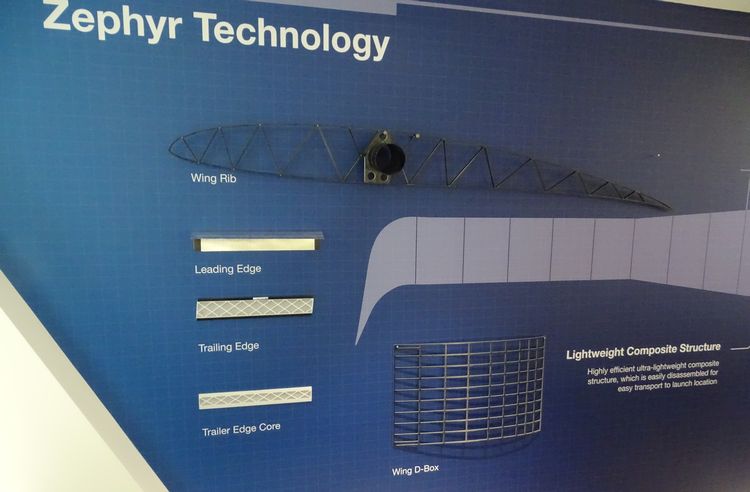 An initial quarter-scale demonstrator aircraft has been built and tested, designed to replicate at a low altitude the behavior and performance of a larger vehicle flying at 65,000 feet. It was a 12kg test vehicle with a wingspan of 8.75m with an endurance of around eight hours on batteries or for longer using solar panels and rechargeable batteries.

The UK’s Defence Science Technology Laboratory (DSTL) hosted the initial test flights and now the program aim is to build two prototypes of the larger design, known as PHASA-35. Weighing in at just 150kg, this platform will have a 35m wingspan and payload of 15kg.

Prismatic Founder and Managing Director Paul Brooks said: “PHASA-35 has the ability to revolutionize the way we think about Beyond Line of Sight (BLOS) communications.”

The program will incorporate longlife battery technology and ultra-light solar cells. BAE Systems has a lengthy history of developing autonomous unmanned air systems, the flight control aspects of which have been flown and evaluated extensively in company-funded and MOD R&D programs in Australia and the UK, so this experience will be available to PHASA-35 to allow for autonomous or ground-piloted vehicle control.

Key structural requirements for the carbon composite design include the ability to withstand torsional loads and wing bending with a very long, thin, wingspan layout, although the aircraft should cruise above the jet stream winds and most adverse weather conditions. In announcing this link-up, BAE Systems officials said that a production HAPS might be able to stay in the air for more than a year before needing to land for routine inspection and maintenance. Aspects such as battery performance and recharging capabilities as well as power management features are being looked at, alongside the most likely early applications, both military and civil (which appear to be identical to those aims being pursued by Airbus with Zephyr). Flight tests of a full-scale PHASA-35 aircraft are due to start in 2019.

The idea of solar-powered, high-altitude unmanned air vehicles has been around for almost two decades, with many flying prototypes demonstrating the potential of such platforms. The difference between those pioneering air vehicles and the latest programs is that the continuing advances in sensors, materials, and power technology has now revolutionized what can be achieved by productionized HAPS designs. There is probably less need for platforms to remain aloft for more than a year, as the speed of progress in enabling technologies is such that more capable system solutions are emerging all the time and the modular payload pods carried by HAPS aircraft can be upgraded or changed more frequently as requirements evolve. This is a new aerospace market bordering on inner-space that seems ripe for major exploitation.


Richard Gardner is an experienced public relations consultant, author, and editor, specializing in aerospace, defense, and transport as well as high-tech industry. Read more from Richard Gardner on SAE.org.


Working on aerospace systems and platforms? Wrestling with challenges? Have aerospace wisdom to share for the greater good of the industry? You're invited to get involved with SAE International -- contact courtney.howard@sae.org to contribute and add your voice to the growing body of knowledge. 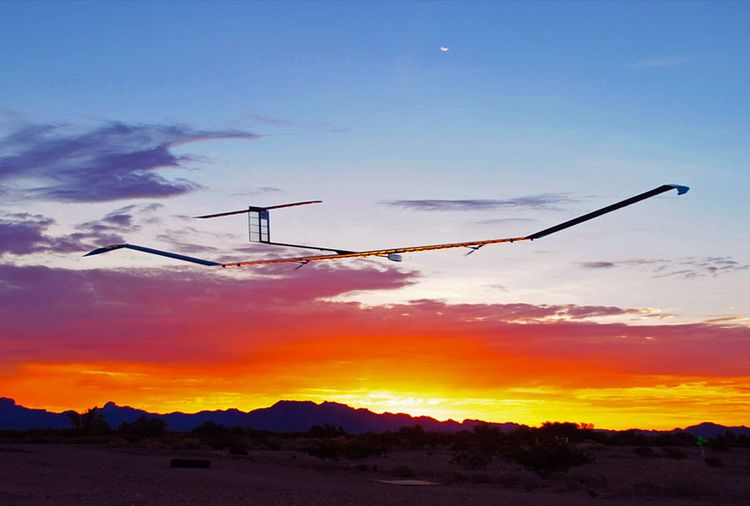 Continue reading »
Continuing advances in sensors, materials, and power technology has now revolutionized what can be achieved by productionized HAPS designs.