Since the scoring in each criterion is relative to the current state of the industry, company scores are not directly comparable to prior editions of the Leaderboard.”

According to a new report from Navigant research, Waymo (Google), GM and Ford have earned the title of “leaders” in regards to their progress in developing autonomous vehicle (AV) platforms. The report seeks to assess the status of the leading manufacturers, suppliers, and tech companies regarding readiness to develop and launch L3, L4, and L5 systems in the next decade. The criteria by which manufacturers were compared include vision, go-to-market strategy, partners, production plans, technology and staying power.

Google’s Waymo subsidiary topped the rankings, followed by GM’s Cruise and Ford’s autonomous program, and reflects the research firm’s assessment of which AV players are best equipped to develop complete automated-driving stacks and service platforms (including perception, processing and control software). The goal of the study was to quantify the current relative position of each company as the latest features are developed and commercialized to help improve safety.

Since the scoring in each criterion is relative to the current state of the industry, company scores are not directly comparable to prior editions of the Leaderboard, Navigant explained in an excerpt from the report: “If a company’s scores drop, it is not necessarily an indication that it has gone backward, but rather, that competitors may have improved more rapidly. As the technology comes closer to series production in the coming years, the rankings in this Leaderboard will likely continue to shift.”

According to the Navigant report, scores were higher for outfits that have made a strong commitment to launching L1 advanced driver assistance systems (ADAS) across their full range of models, and those that have already announced plans or launched L2 or L3 systems by end of 2019. Scores were also higher for companies that have publicly demonstrated L4 capability and provided insight into deployment plans. A graphic (below and in the image gallery) provides a quick visual representation of the results, and more information can be had in the full report available via www.navigantresearch.com. 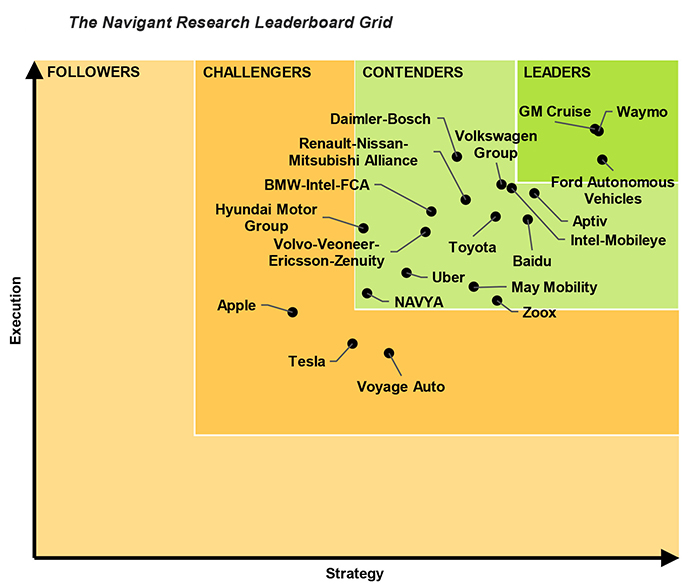 Continue reading »
Since the scoring in each criterion is relative to the current state of the industry, company scores are not directly comparable to prior editions of the Leaderboard.”