With our two-speed technology, with a first gear and a reduction ratio around 17:1, you reach 3,500 Nm. That's the perfect fit for a small electrical motor.”

The new 2-speed “seamless shift” eTransmission has the potential to extend vehicle range while also providing increased torque for improved acceleration and a higher top speed, all while using smaller electric motors. Efficiency and further powertrain downsizing are enhanced by the eTwinster’s coaxial layout, while improved stability and dynamic performance are possible thanks to its torque-vectoring capabilities.

“This new technology demonstrator showcases how we are evolving and improving integrated eDrive technologies to help OEMs,” said Hannes Prenn, COO of GKN ePowertrain. “Our dedicated focus on production and development of electrified drivelines will enable us to support the rapid acceleration in demand for BEVs equipped with all-wheel drive systems in the coming years.”

Two speeds, extended capability
On the GTD19, the donor Jeep Renegade had its entire powertrain removed to turn it into a full BEV, with GKN integrating its new 2-speed eTwinster system onto the front axle. The Renegade’s internal combustion engine was replaced with a 120kW (161hp)/220 N·m (162 lb·ft) GKN e-motor, which thanks to the two-speed transmission’s reduction ratio can deliver 3,500 N·m to the front axle and vector 2,000 N·m to either front wheel when required. The eTwinster’s GKN-developed software manages automatic shifting of the 2-speed transmission, which is tuned to minimize power and torque losses during changes.

“It's not a big electric motor,” explained Andreas Mair (below), GKN’s senior director of AWD and e-drive systems, of the unit installed in the GTD19. “It's permanent magnet, more or less standard traction-motor technology. But with a 2-speed, you reach the required torque for a pure electric vehicle: 220 Newton-meters times 10 would give you around 2,000, which is not enough [torque] for a pure electric vehicle. With our two-speed technology, with a first gear and a reduction ratio around 17:1, you reach 3,500 Nm. That's the perfect fit for a rather small, 120-kW electrical motor, [but] the torque speed range is much larger with a 2-speed.” 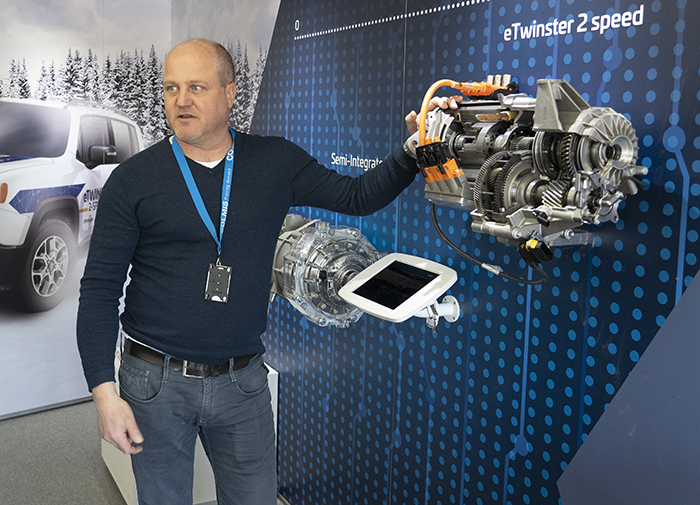 Torque-vectored FWD
Unless you get to drift your way to work each day, torque vectoring likely provides larger real-world benefits with FWD than in rear- or all-wheel drive (AWD) configurations. These include modulation of an electric motor’s high initial torque for improved stability, while also assisting in lateral control for improved FWD dynamics by prioritizing torque delivery to the outer wheel to help correct understeer yaw moments.

“In the front, obviously it helps you to overcome the understeering behavior of a front-wheel-driven vehicle,” Mair explained. “And because the Twinster can put the torque to the wheel where it is required, you reach a very nice performance for a [FWD] vehicle.”

GKN claims its 2-speed coaxial layout is significantly smaller than systems with equivalent power outputs, permitting the eTwinster to be more easily integrated into existing vehicle platforms. It’s also adaptable for use across vehicle-size segments in FWD, RWD or AWD applications as a primary or supporting axle. In the GTD19, the drivetrain tech was integrated into the existing FCA platform without major modification and includes a GKN-derived electric motor and GKN-developed inverter controls.

Low-mu performance
In the multiple low-traction environments of GKN’s Wintertest, media had to the opportunity to sample the eTwinster-equipped GTD19 on steep, split-mu setups, as well as on layouts arranged on the Colmis Proving Ground’s frozen lakes. Using only active (non-brake-based) assist, the GTD19 was able to easily climb the steep, split-mu gradients absent any significant steering-wheel tugs.

On the frozen circular tracks, the eTwinster’s ability to interpret driver-intention was quite uncanny, providing stability and maintaining cornering steering control at speeds far above what most consumers would encounter. On the dynamic-handling course, the 2-speed allowed the GTD19 to accelerate smartly and with stability, lacking any FWD torque-steer drama thanks to the limited-slip function of the Twinster-based tech. Though available seat-time in the prototype was limited, the 2-speed’s gear changes remained imperceptible.

If you wonder what such a prototype would be like with two e-axles installed, it turns out GKN had the same wicked thought. For the media event, the GTD19 had a GKN semi-integrated, coaxial, single-speed eAxle/planetary gearset installed on the rear of the demonstrator, with in-cabin controls to switch between FWD, RWD and AWD. In AWD mode, its acceleration and dynamic performance on the frozen lake bordered on ludicrous, with all four wheels shredding the surface into a crystalline fog. Perhaps this entertaining line of thought will influence next year’s GTD20 prototype.

Continue reading »
With our two-speed technology, with a first gear and a reduction ratio around 17:1, you reach 3,500 Nm. That's the perfect fit for a small electrical motor.”