We don’t do concepts for the sake of concepts.”

The New York International Auto Show (NYIAS) rolled into the Javits Convention Center on Manhattan’s west side right after April’s tax day, and the 2019 version saw the industry well represented, with BMW the only major OEM sitting out this year’s gathering. Minus that absence, NYIAS appeared more relevant than it has in the past few years, with a host of production-vehicle world debuts (all SUVs), and several concepts (mostly electric) previewing some unique technologies. In addition to Mazda's diesel CX-5 debut and Honda's unique safety display, below is a quick roundup of the show’s most notable sheetmetal, starting with six SUV premieres.

The all-new Corsair (top and above) flushes out Lincoln’s sport-utility lineup and is the second SUV based off Ford’s new global FWD architecture (after the new Escape). The C-segment Corsair will debut with gas-only powertrains in the U.S. and China this fall (with local manufacturing for each market), but future hybrid versions are likely given the architecture-sharing Escape is debuting with three electrified choices.

Two turbocharged 4-cylinder engines will be offered (2.0L and 2.3L), both paired to an 8-speed automatic and an available AWD system. The Corsair will also feature a unique and Lincoln-first integral-bush rear suspension to improve ride isolation. A dual-wall dashboard similar to the tech debuting on the Ford Explorer will help owners enjoy the 14-speaker Revel audio system, and the Corsair will be the first Lincoln to offer Phone As A Key, which will permit owners to unlock/start/drive the Corsair with their compatible smartphone.

Toyota revealed the fourth-generation Highlander SUV in New York, with the popular 3-row SUV gaining 2.5 inches in length via the Toyota New Global Architecture (TNGA-K). The 7- or 8-passenger Highlander shares this architecture and its chief engineer with the new RAV4, and will be offered in FWD and AWD variants with a 3.5L gasoline V6 or 2.5L 4-cylinder hybrid setup. Toyota claims the hybrid model’s fuel economy has improved 17% to 34 mpg combined.

Like the RAV4, hybrid versions of the all-new Highlander will package the battery under the rear seats so there’s no electrified cargo-space penalty. AWD versions will feature a fuel-saving driveline disconnect and dynamic torque vectoring. Toyota claims the Highlander’s all-new 12.3-in. multimedia display will be the largest in its segment. Gasoline versions are expected in dealerships at the end of 2019, with hybrid versions available by February 2020.

Subaru debuted the sixth generation of its Outback in New York, with the all-new SUV sharing the same new global platform which now underpins everything in the Subaru lineup save the BRZ sports coupe. Subaru claims the new Outback provides a 70% gain in both torsional and front-suspension rigidity, a 100% gain in both front lateral flexural and rear subframe rigidity, and the capability of absorbing 40% more energy in front/side crashes than the current model.

For the first time since 2009, the Outback will offer a turbocharged engine with an available 2.4L opposed 4-cylinder, with a naturally aspirated, direct-injected 2.5L as standard. All Outback models offer 8.7 in. of ground clearance and standard AWD with active torque vectoring, and both engines are paired with Subaru’s Lineartronic CVT, which provides an 8-speed manual function controlled by steering-wheel paddle shifters.

Subaru says the new Outback is “almost 3 dB quieter” at highway speeds thanks to new door seals and thicker glass all-around including laminated glass for the windshield and front doors. Other available upscale appointments include new three-level seat heaters that extend coverage up to the shoulders, a heated steering wheel, hands-free liftgate, an LTE-based Wi-Fi hotspot, and a tablet-style, 11.6-in. multimedia display. The 2020 Subaru Outback will go on sale in fall 2019. 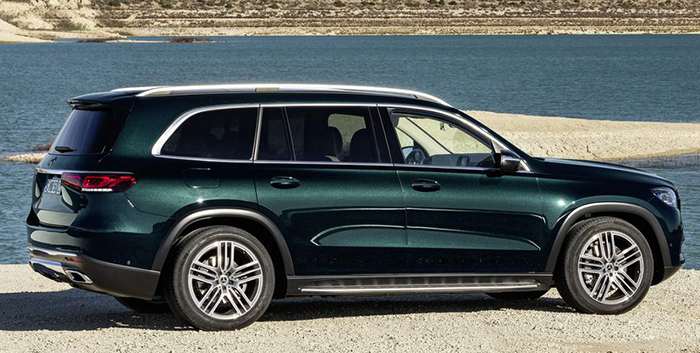 Mercedes-Benz debuted two SUVs in New York, the 7-seater GLS (above), and the fully electric C-segment EQC (below). The GLS, originally launched as the GL in 2006 (and refreshed in 2015) gets a complete re-do that sees its aero drag drop from a Cd of 0.35 to 0.32, its wheelbase grow 2.4-in. to 123.4 in., and second-row legroom increase by 3.4 in. The all-new GLS will offer two twin-turbocharged gasoline engines, both featuring M-B’s “EQ Boost” 48-volt integrated starter generator (ISG) mild-hybrid setup (future plug-in-hybrid variants will be labeled “EQ Power”).

The GLS 450 will feature the bi-turbo inline 3.0L 6-cylinder, the GLS 580 the 4.0L twin-turbo V8. All variants of the new GLS are AWD, with power transmitted via the 9-speed automatic to an electronically controlled multi-plate-clutch transfer case. The system can vary drive torque from 0-100 percent between the axles, and a reduction-gear transfer case for improved off-road capability is available on the GLS 580.

The new GLS includes the latest generation of the Mercedes-Benz User Experience (MBUX) infotainment system, and features two 12.3-in. display screens. The MBUX system provides both voice and gesture recognition, and using AI, also has learning capability. This can manifest via suggestions for commonly scheduled phone calls, or radio stations frequented at a particular time of day (i.e. NPR during the morning commute). The new GLS is expected to go on sale in the U.S. by the end of the year, and will be produced in Tuscaloosa, Alabama.

What M-B is calling its pioneer of the fully electric EQ portfolio, the all-new, 2-motor, AWD, EQC “Edition 1886” (commemorating the first year of the automobile) will be available exclusively in high-tech silver. All EQC models will feature a 1,437 lb., 80-kWh lithium-ion battery pack, a water-cooled 7.4 kW AC on-board charger and DC-charging capability up to 110 kW. M-B is quoting an NEDC range of 277 miles (446 km) and the EQC is expected to go on sale in the U.S. in 2020.

Hyundai, which has launched six new SUVs since 2017, chose NYC for the world debut of its latest and smallest sport utility, the Venue. Hyundai’s “most affordable, urban entry” SUV is a FWD, 5-passenger 2-row utility powered by a port-injected 1.6L 4-cyclinder engine paired with a 6-speed manual or Hyundai’s new “intelligent” CVT. It’s plucky and cute in person, particularly with the optional Denim color scheme, which can be combined with a denim cloth and leatherette interior and white contrasting roof. The Venue will feature an 8-inch Android Auto-/Apple CarPlay-compatible display screen, be built in Ulsan, Korea and arrive at Hyundai dealerships in the U.S.  in the fourth quarter of 2019. 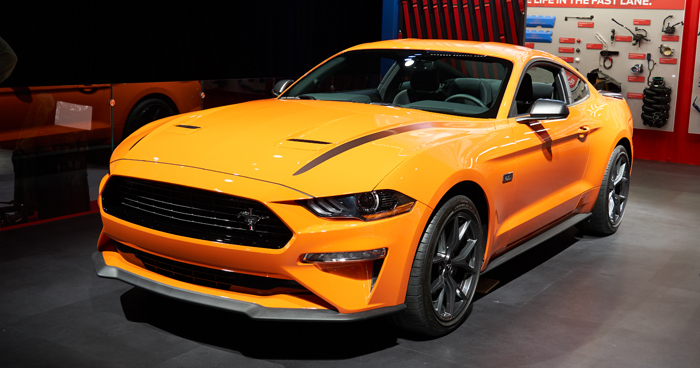 The new 2.3L High Performance Package (HPP) for the base EcoBoost Ford Mustang is essentially a reworking of the 2.3L engine from the Focus RS, tuned and plumbed for the RWD Mustang, and then layered with chassis upgrades from the Mustang GT Performance Package. The package with be available for MY2020 coupes or convertibles, in either manual or automatic guise.

The HPP-equipped Mustang features a 5% larger (63mm) twin-scroll turbo compressor and larger radiator calibrated for both the 10-speed automatic and 6-speed Getrag manual transmission. It’s expected to produce 330 hp/350 lb-ft (246 kW/476 Nm) with top speed increasing to 155 mph, a 10 mph gain over the 2019 EcoBoost Performance Package and 34 mph faster than the base EcoBoost Mustang.

“It’s not just the horsepower gains over the standard 2.3-liter EcoBoost, it’s the broader torque curve that delivers 90% of peak torque between 2,500 and 5,300 rpm, which is 40% wider than the base EcoBoost engine,” said Carl Widmann, Mustang chief engineer. “Plus, horsepower holds stronger up to the 6,500-rpm redline – enabling more usable power and torque for enthusiasts and weekend autocrossers to enjoy.”

The Mint Concept from Genesis was easily the coolest concept at the 2019 NY show. Fully electric with a rear-mounted charge port, in the flesh it reminds of a cross between a Honda CRX and a Lotus Elise. According to Genesis (Hyundai’s luxury division) the Mint Concept represents a holistic collaboration between its design studios, led by Genesis Global Advanced Design in Germany, Genesis Design Team in the U.S., and the Namyang Design Center in South Korea. Very slick rear scissor doors permit access to the rear parcel shelf, and the lack of a trunk permits a surprisingly spacious interior for two. The Mint or something like it could have a production future, as a Genesis spokesperson on site said, “We don’t do concepts for the sake of concepts.”

The Kia HabaNiro concept (above) is a fully-electric, all-wheel drive, four-seater that in theory travels 300 miles (483 km) on a charge, provides fully autonomous (Level 5) drive modes and sports butterfly wing doors. Kia is claiming this is not a total pie in the sky concept, but “a prescient look into the future of mobility.” Traditional controls have been replaced by a full-width windshield head-up display (HUD) controlled by a touch sensitive instrument panel that allows users to swipe and move options across the HUD.

Kia’s new AI-based Real-time Emotion Adaptive Driving (R.E.A.D.) system (introduced earlier this year at CES), enables the HabaNiro’s Eye Tracking System (ETS) to monitor where the driver is looking. If they gaze at the top of the windshield where a conventional rearview mirror would be located, the system can activate the 180° rearview video display, or make the A-pillars appear transparent while looking both ways at an intersection.

The Kia Stinger GTS (above) will be limited to just 800 units and available in any color you want as long as that’s Federation Orange. Available in either RWD or AWD, the Stinger GTS’s AWD system has been tweaked to close the gap in behavior with the RWD Stinger GT, adding a mechanical limited-slip rear differential and new drive-mode tuning to amplify the rear-biased dynamics, including a Drift mode that sends up to 100% of available torque to the rear wheels and holding gears without upshifting. There have been no changes to the 3.3L twin-turbo V-6 and power is still routed through an 8-speed automatic transmission. Production of the Stinger GTS is expected to begin before the end of 2Q 2019, with pricing starting around $44,000.

Already on sale in China, the Mullen Quiantu K50 electric supercar features a liquid-cooled and heated T-shaped 70-kWh lithium-ion battery pack mounted within an aluminum frame and enclosed by carbon fiber body panels. The K50 is motivated by a 296 kW (402 hp) electric motor, is governed to 125 mph, will hit 60 mph in 4.2 seconds and provides an estimated range of 250 miles. The chassis features a double-wishbone suspension and dynamic torque vectoring, colors are baked into the body panels and a solar roof controls the cabin climate when the K50 is parked. Southern California-based Mullen Technologies will homologate the K50 for the U.S., where it is anticipated to go on sale in 2020.

Continue reading »
We don’t do concepts for the sake of concepts.”