Throughout the departure procedure and climb-out, laden with four passengers and 200 pounds of cargo, the Falcon 8X – a larger variant of the Dassault 7X – registered significantly below the 95 dBA SEL sound limit.

“Business aviation is about flying precisely where you need to be. Today’s flight on the Falcon 8X embodies everything that advanced design can accomplish: unparalleled airport performance, a quiet noise footprint, and extended capability, all in a large cabin business jet,” says Eric Trappier, chairman and CEO of Dassault Aviation. “This is not possible in any other business jet in the ultra-long range class.”

The record, pending official ratification by the National Aeronautic Association (NAA), was made after taking off from SMO’s notoriously short 3,500-foot runway, complying with strict noise abatement departure procedures, and flying with “overall poor tailwinds, averaging just five knots”. The previous record was made when SMO’s runway measured 5,000 feet.

The aircraft needed less than 2,000 feet of runway upon landing at Teterboro at 3:36 p.m. local time and a balanced field length only of 3,200 feet when it departed at 8:08 a.m. local time. Throughout the departure procedure and climb-out, laden with four passengers and 200 pounds of cargo, the Falcon 8X – a larger variant of the Dassault 7X – registered significantly below the 95 dBA SEL sound limit. 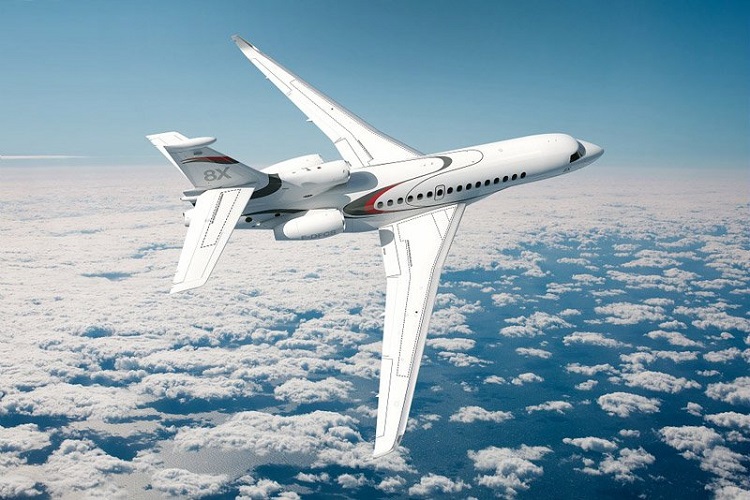 The new speed record follows a series of records set in 2018, including a challenging mission from London City Airport (LCY) that crossed the Atlantic Ocean to Beverly Regional Airport outside of Boston, Massachusetts in 6 hours and 44 minutes. LCY’s stringent noise rules, short runway, and steep glide scope limit the airport to very few aircraft types, but all production Falcon aircraft meet those requirements and are certified to operate at LCY.

Since its entry into service in late 2016, the Falcon 8X has been widely recognized not only for its superior performance, including its ability to land at airports like Aspen/Pitkin County Airport in Colorado and Lugano Airport and Gstaad Saanen Airport in Switzerland with challenging approaches that typically limit access to very few ultra-long range business jets.

The Falcon 8X, powered by three Pratt & Whitney Canada PW307D turbofan engines, has maximum takeoff with of 73,000 pounds and a range of 6,450 nautical miles.

Continue reading »
Throughout the departure procedure and climb-out, laden with four passengers and 200 pounds of cargo, the Falcon 8X – a larger variant of the Dassault 7X – registered significantly below the 95 dBA SEL sound limit.