Our components are part of a chain involved in noise and vibration. Having our own anechoic chamber we are able to develop solutions in collaboration with Tier 1 suppliers and OEMs.”

Saint-Gobain is a company that understands how vital NVH R&D is for perceived quality. Unwelcome noise is a major challenge in premium cars, but it is the minor components that matter. For Saint-Gobain that means particularly its bearings and tolerance rings. The company has become so determined these can assist with vehicle NVH that it has built its own semi-anechoic chamber (above), hardly a routine investment for a Tier 2 supplier.

Until recently, Saint-Gobain used facilities at European universities and a specialist test site in Germany for NVH development, but its own chamber in the UK will help the company to better understand OEMs’ systems and improve performance. 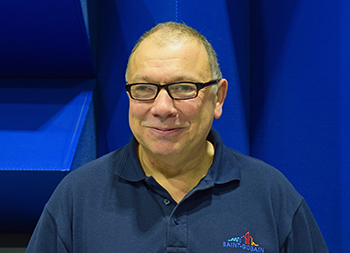 The ISO 3745 and 3744 compliant facility in Bristol was established with support from Southampton University’s Institute of Sound and Vibration Research (ISVR Consulting) and by Brüel & Kjaer, with headquarters near Copenhagen, Denmark.

Playing a major role in the operation of the chamber is Allan Robinson, Saint-Gobain’s NVH Program Leader (left). Following a masters program in acoustics and vibration control, Robinson embarked on a 30-year career as a senior NVH development engineer with companies including Ford, JLR, Rolls-Royce and Ricardo. Automotive Engineering recently spoke with Robinson to discuss the nuances of NVH.

Automotive Engineering: It’s very unusual for a Tier 2 supplier to have a costly semi-anechoic chamber, what drove your decision to build one?
Allan Robinson, Saint-Gobain NVH Program Leader: Our components are part of a chain involved in noise and vibration. We always aim to reduce any noise issue at source and by having our own anechoic chamber we are able to develop solutions in collaboration with Tier 1 suppliers and OEMs. The facility allows us to work with them on real-world problems at system level development. Although we make small components, in the chamber we can for example replicate an entire seat structure, a chassis system such as an electric power assisted steering rack, or an electric motor mounted as they would be in a vehicle.

This enables us to more quickly reach a solution with regard to our own components as part of the whole. Also, as the market develops, we are moving increasingly to look at the effects of noise concerning hybrids and pure EVs in which some technologies and components may be more dominant than in current ICE vehicles. An added difficulty is determining the likely timescale of a sudden increase in EVs.

AE: Integration of systems and components is essential but tracing the source of an NVH issue must be a challenge?
AR: There may be a source anywhere in the vehicle, transmitted via structural or airborne paths which interact with other parts of the vehicle. All those parts will have some influence on NVH. Tackling these fundamentals creates a lot of work, such as the effect of chassis and steering system interaction on different surface topology and friction coefficients putting large inputs into a structure to cause NVH.

AE: Is lightweighting adding to your challenges?
AR: It makes tackling NVH more difficult because it reduces the transmission loss. Impedance of noise by the mass of a body panel or the vehicle’s whole structure is significant, so the lighter the weight the more transmission of noise could be expected. This situation is increasing as lightweighting becomes more essential to get more range out of a battery charge.

AE: Bodyshell (body-in-white) torsional rigidity is generally now very high; is that a good thing for reducing NVH?
AR: Yes, but there is a caveat. It is good so long as we don’t tune it to other features on the car! For every mode we effectively get six degrees of freedom: fore and aft, laterally, vertically and rotational, which rolls around those three axes. What we want to do is separate all of those and ensure that they are not coincident with any feature such as engine idle in an ICE car, suspension modes etc.

AE: Do ambient and therefore material temperature variations add a further complication?
AR: Yes, and it is a problem to simulate. It necessitates the added use of a climatic chamber. That’s a case of working in co-operation with an OEM that has appropriate facilities. Solving rattles is basically about overcoming clearance in very small dimensions - a gap between a shaft and housing that allows impact. If the materials of the shaft and housing are of different characteristics they will expand at different rates, thus changing the relative clearance.

AE: Are autonomous vehicles likely to present specific challenges to your NVH R&D?
AR: Yes, because they are likely to have more mechanisms fitted – e.g. more struts and hinges because cars may increasingly have sliding and automatic doors. We expect more squeaks and rattles. Also, noise transmission through joints and structures needs to be better than it is now.

Autonomous vehicles will have the potential for generating noise because they will not only incorporate more door and seating options but also seating layouts will be different to today’s cars as well. Use of more electric motors may be required to provide non-manual and automatic adjustments. So we are expecting more mechatronics to be making more noise. Added to this, the reduction of masking noise from removal of ICE sources means that we see the importance of BSR [buzz, squeak and rattle] prevention growing.

Continue reading »
Our components are part of a chain involved in noise and vibration. Having our own anechoic chamber we are able to develop solutions in collaboration with Tier 1 suppliers and OEMs.”