The subsequent flexibility, combined with the close correlation of simulation and physical results, allow design decisions to be evidence-based, enabling true virtual sign-off early in the vehicle program.”

A vital aspect of replacing physical prototypes with virtual solutions is to ensure that the necessary crashworthiness of the new vehicle has been achieved at the point where the design is signed-off. But now that can be earlier, saving time and cost, believes Bipin Patel, UK managing director of Italian headquartered international engineering simulation company, EnginSoft.

“Although tools exist for modelling crash performance, they require a design as a starting point, which implies that many critical design decisions will have already been taken. By the time any deficiencies in crashworthiness are detected, considerable investment in time and money will have been made which may be put at risk.”

To help overcome the risk, EnginSoft UK has developed a solution using Artificial Intelligence (AI) to capture lessons from virtual crash simulations and apply them early in the concept phase to deliver financial savings while giving an auto maker engineering and commercial advantages when bringing a new model to market. 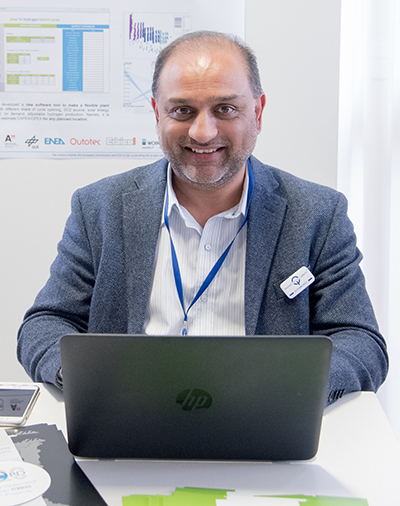 Patel (right) explained that the company’s solution, initially developed for a global OEM, can assess alternative designs so quickly, that users can interact using “what if” techniques to understand the influence of different engineering parameters on the overall result.

The subsequent flexibility, combined with the close correlation of simulation and physical results, allow design decisions to be evidence-based, enabling true virtual sign-off early in the vehicle program, he said. Many OEMs are aiming to achieve cost and time-saving virtual sign off including JLR, which stated publicly in 2015 that it was seeking to eliminate the need for all physical prototypes from its early development processes by 2020.

“We have already seen product development timescales within the auto industry shrink from four years to 18 months, with the potential to save a further three months,” Patel said. “In addition, the financial risks are greatly reduced because investment in tooling, for example, is underpinned by greater engineering confidence based upon hard data. The cost of crashworthiness simulation is typically less than 10% of the sums required to correct even relatively minor sub-optimal design decisions. In the case of more significant changes - such as those experienced if revision of the A-pillar geometry became necessary - the savings would be even more impressive.”

EnginSoft harnesses a number of existing analysis meta-modeling tools but “democratizes” them by means of what it describes as a “powerful yet user-friendly” GUI (Graphical User Interface) that allows accessibility into the powerful meta-models. This makes them accessible to all stakeholders within the business, not just simulation experts, and enables the management team to be directly involved in assessing the design, as opposed to waiting a number of months for crash simulation experts to provide feedback on a specific design.

“Physical prototypes are largely eradicated. Our methods reduce the valuable time between design-simulation-redesign iterations that occur,” Patel explained. “In the case of vehicle styling, the redesign can hit a road-block if it has been signed off by the chief engineer. Engineers are then unnecessarily constrained, since if the designers had known their decisions were going to cause costly issues, they could/would avoid that specific design before it was signed off.”

Generating meta-models
EnginSoft’s engineers work closely with vehicle engineers to establish the system, and then support the initial stages. The proposed vehicle model is morphed in size and shape followed by a DoE (Design of Experiments) process, coupled with what the company terms “advanced regression techniques”, establishing optimal solutions to generate a meta-model or surrogate model. This is, in effect, a model of a model, a mathematical surrogate that represents how the system responds to input changes.

Putting more detail on the process, Patel said that combined with the GUI, this can be interrogated by staff with no knowledge of the intermediate steps: “User-selected parameters, such as the H-point or seat belt position for a vehicle occupant, can be changed by a simple slider bar function on the screen, the effect this has on dynamic head or knee trajectory after impact being observed directly within the design environment allowing rapid investigation of design alternatives. It also permits informed discussion among a wider review group.”

The AI algorithms that are part of Italian software provider ESTECO’s “modeFRONTIER” (an integration platform for multi-objective and multi-disciplinary optimization) are utilized to train and validate the meta-models, to ensure they represent reality with a minimal degree of error. The available design space is represented by a mathematical surface meta-model that is said to be very quick to explore, either by a manual user or another smart algorithm, requiring no special skills for its use.

Model validation is, of course, essential; the base model must be a reliable representation of the physics of the real vehicle, often an evolution of a current production vehicle or a reliable existing data set, stressed Patel: “Where no such option exists, for example with a start-up company, piecemeal testing of key areas or sensitivity analysis to identify the most influential parameters is necessary.” EnginSoft’s technology has now been used by at least one major OEM to simulate crashworthiness in new model development, with claimed “very good” results.

Continue reading »
The subsequent flexibility, combined with the close correlation of simulation and physical results, allow design decisions to be evidence-based, enabling true virtual sign-off early in the vehicle program.”