“It’s a common misconception that plane crashes are not survivable, when in fact many are,” says Joseph Pellettiere, chief of crash dynamics for the FAA.

This test, one of a series of NASA and FAA partnered activities, was conducted to better understand the dynamic forces on an aircraft and its passengers during a crash landing. The findings will support the development of a new FAA performance-based rule that will simplify the certification process by eliminating or minimizing the use of special conditions to certify aircraft.

“It’s a common misconception that plane crashes are not survivable, when in fact many are,” says Joseph Pellettiere, chief of crash dynamics for the FAA. “Looking at the response of the plane, how it crushes in the dirt, as well as the kinematics of the crash test dummies inside helps us know as much as possible to make them as safe as possible.”

The 33,000-pound F28 airframe, the largest to be tested at the gantry, was dropped from a height of approximately 150 feet. It was filled with high-definition cameras, powerful high-speed cameras, and anthropomorphic test devices, or crash test dummies, including the U.S. Army’s Warrior Injury Assessment Manikin (WIAMan), which is designed to gauge the forces exerted on the human body inside of vehicle driving over an exploding improvised explosive device (IED).

“The unique ability of WIAMan to gather data on force, or load, being applied to the body from underneath also provides a valuable tool when studying an aircraft crash,” says Terry Holdren, U.S. Army WIAMan project coordinator. “We are excited and proud to be working with the FAA and NASA to help make aircraft crashes safer.”

Other crash test dummies included those supplied by FAA Civil Aerospace Medical Institute that ranged in size from a 3-year-old child to an obese male weighing more than 270 pounds. 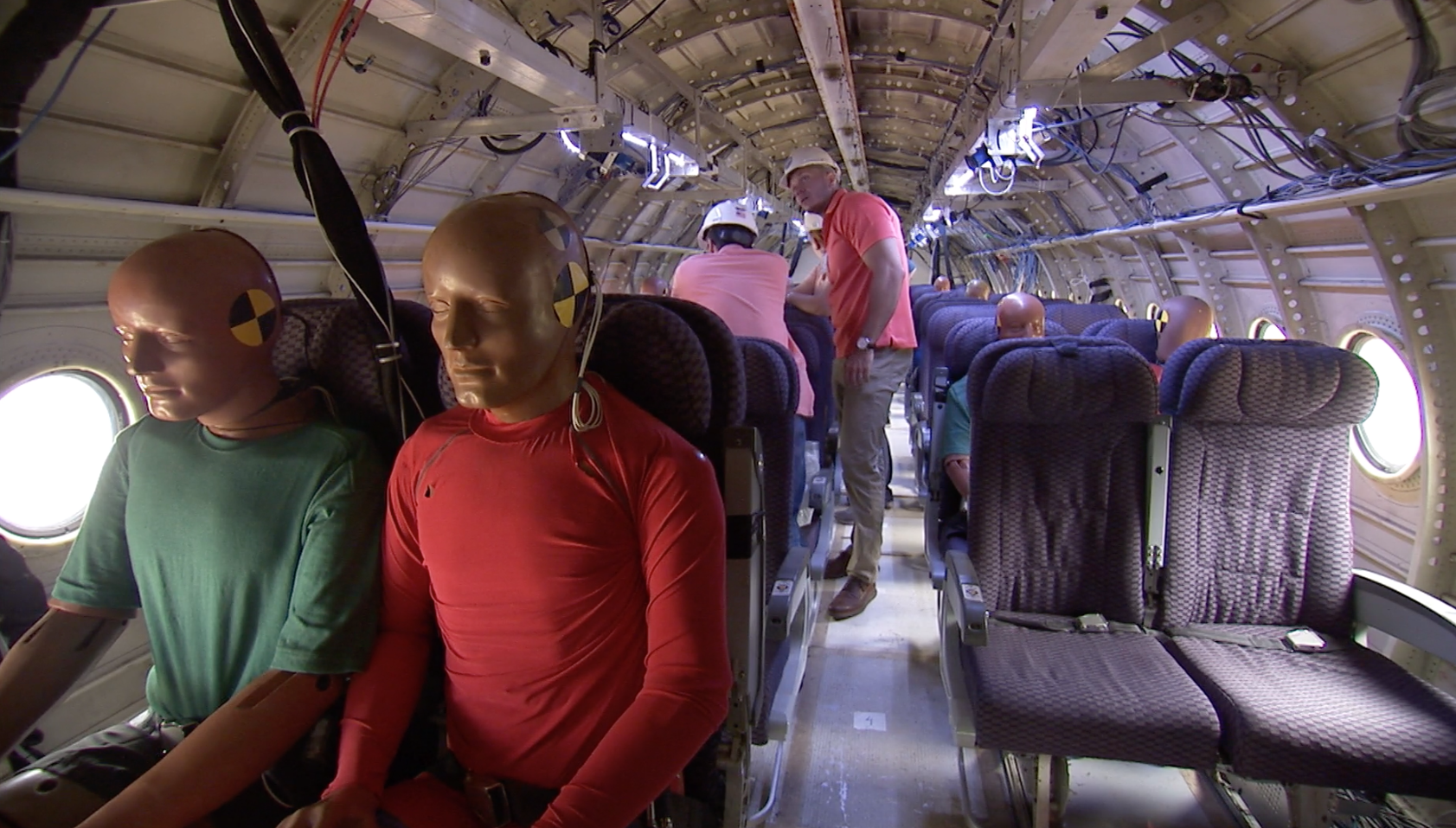 The aircraft was also covered in hundreds of round black dots to facilitate the comparison of dimensional scans of the aircraft structure before and after the test. Once processed, the collected crash test data will be used in computer simulations to advance aircraft crash-safety for future airline passengers and cargo.

“The aircraft is painted in that particular pattern to allow for a full field photogrammetry experiment to be conducted,” says Martin Annett, structural dynamics branch head at Langley. “Specialized cameras will track each dot so we can track the motion of any deformation of the aircraft. Once all dot locations are computed, the entirety of the airframe deformation can be displayed and examined.”

Learn more about crashworthiness and certification

“The FAA is in the process of establishing new guidelines for transport-category aircraft and their crash-worthiness,” added Annett. “Previously NASA Langley assisted the FAA in gathering data from purely vertical drops of fuselage sections. The previous data combined with the data generated from this horizontal and vertical momentum crash test will play a role in establishing what the FAA guidelines on crash-worthiness should be.”

The gantry at NASA Langley Research Center was built in 1963 with the original purpose of training Apollo astronauts. While the facility is currently used to perform drop tests for space programs like the Orion Crew Exploration Vehicle and controlled descent tests for retro-rocket landing systems, it is often used for general aviation crashworthiness studies.

Continue reading »
“It’s a common misconception that plane crashes are not survivable, when in fact many are,” says Joseph Pellettiere, chief of crash dynamics for the FAA.