With this technology, Akasol is able to outperform today’s solid-state technology.” 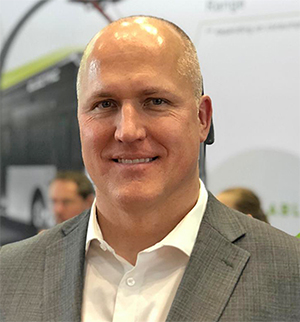 The company’s president also confirmed Akasol will build a manufacturing facility in the Detroit area targeted to begin production in mid-2020.

But as regulatory and environmental interests dictate electrification alternatives to traditional internal-combustion powertrains for all manner of commercial vehicles, Schulde said Akasol sees the off-highway sector growing. He said smaller-sized construction equipment intended for use in urban and indoor areas is increasingly targeted for 48-volt electric systems, as well as higher-voltage applications of 600V or 660V for larger machines.

New standard for energy density
At the recent Battery Show North America, Akasol showcased its new AKASystem AKM CYC battery, a nickel-manganese cobalt (NMC) lithium-ion chemistry that the company said achieves an industry-leading 221 Wh/kg. Designed as a modular and scalable battery for high-power/long-range in vehicles such as city buses, the system is liquid cooled and capable of accepting high fast-charging rates required for many commercial-vehicle applications.

The new battery is based on specially designed 21700-format cylindrical cells that rival current solid-state battery technology. Schulde told SAE that Akasol is keeping an eye on solid-state battery developments and is trying to be “cell-agnostic,” but for now, NMC chemistry is the company’s focus.

“With this technology, AKASOL is able to outperform today’s solid-state technology in terms of price competitiveness and availability, while increasing energy density by approximately 30-40%,” Schulde said. “The solution also can be used for fast charging, which is particularly important for increasing the uptime of commercial vehicles. AKASOL plans to bring the solution to serial production in 2021 and already has customers starting sample operation by the end of this year.”

Continue reading »
With this technology, Akasol is able to outperform today’s solid-state technology.”