Ford has previewed its next-gen SYNC 4 communications and entertainment system, which will provide cloud-based connectivity via larger screens and advanced voice recognition. The system is built upon a new connected-vehicle network architecture that leans more heavily on ethernet, and will permit over-the-air (OTA) updates of nearly every major vehicle system, from ADAS to ABS. Thanks to the new architecture – which runs in-house software from a growing team – SYNC 4 will be easily upgradeable but not backward compatible, and will begin its rollout in the Ford lineup next year.

A priority for the SYNC 4 development team was matching the 24/7 cloud-based connectivity consumers have become accustomed to on their smartphones, with a more conversational, cloud-based voice control to leverage that capability. Along with other conveniences like a searchable and illustrated digital owner’s manual (with cloud-based videos), SYNC 4 will also provide USB-free smartphone-app functionality and improved Apple CarPlay/Android Auto integration that can simultaneously share screen space with SYNC features.

Cloud-based capability, bigger screens
Key to SYNC 4’s newfound capabilities is its constant connection to the cloud. Though Ford did not provide networking hardware specifics, the new system will launch with a 4G LTE modem. According to SYNC 4’s chief engineer Gary Jablonski, the entire system is a Ford design. “We are not manufacturing the electronics ourselves. We have partners that will be building the electronics for the vehicle,” he said. “But all of the hardware and the software designs have been done in-house.” 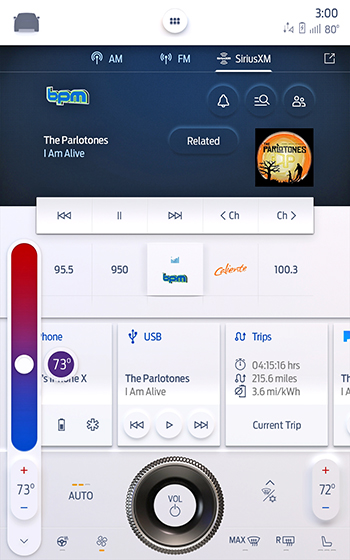 The new functionality will be delivered via larger screens (8-, 12- and 15.5-inch), and will feature unique interface graphics depending on the particular vehicle and screen size/layout (the two smaller screens are horizontal, the largest is vertical). The familiar SYNC interface has been polished with simpler interfaces and larger touch-screen areas, which combined with the more-capable voice recognition should help combat driver distraction.

A key aspect of the new SYNC 4 design is what the Ford team labels “recency,” which adapts the display over time to the most common activities. The system can be keyed to multiple users and is smart, able to tailor the display to a particular time of day (i.e. surfacing an NPR app in the a.m. for your morning commute). On the largest 15.5-inch display, an example of recency is “Adaptive Dash Cards,” small, interactive display squares (right) that gather toward the bottom of the screen based on use, and permit actions such as song-skip or hanging up a phone call without leaving the main screen.

Growing software team
Jablonski has been working on Ford’s infotainment system for almost 15 years and was part of its original engineering-team trio. “This team started with three people. I can't say who number one was, but I was one of them,” he said. “There's now over 500 software engineers employed by Ford. Clearly, Ford understands we have to become a technology company; we have to become a software company. We've made an extraordinary investment and continue to invest. We're at 500 and still growing.”

According to Jablonski, the shift to in-house development has really come to fruition with SYNC 4. “Our initiative to bring all of the software development activity for connectivity and SYNC in-house probably started about five years ago,” he said. “The MY2020 SYNC software that's on the road today was our first in-house development, and SYNC 4 is our first ground-up development. We've had great partners throughout all the generations of SYNC. But it makes a difference what the name is on a person's badge when they're doing the work.”

“It's very different when you go to a partner that you're working with and say, ‘I'd like you to find your very best people and put them to work on my project,’” Jablonski continued. “They're not always motivated to do that. Having people with Ford badges I think is increasing the quality of the work they're doing. They have more skin in the game, they're super motivated to get the vehicle to market and we have the ability to make decisions on a snap in terms of where our priorities are.”