Our mitigation strategies and our engineering solutions are going to have to extend beyond control of the vehicle itself.”

As concerns mount around how automated-vehicle (AV) passengers will react to increasing degrees of driving detachment, researchers are trying to better understand how and why humans are affected by motion sickness. Aided by sophisticated tools and measuring apparatus, multinational research efforts are quantifying the constituents of motion sickness, while grappling with the intensely individual nature of the experience.

Because motion sickness is different for everyone, what’s needed is a consistent and repeatable testing protocol explained Monica Jones, assistant research scientist in the biosciences group at the University of Michigan Transportation Research Institute. 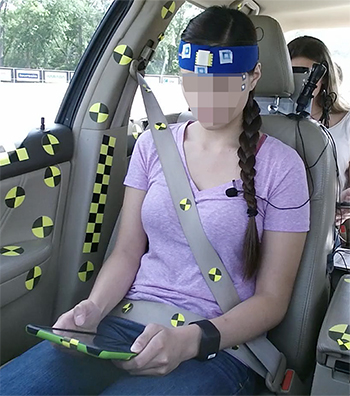 Jones envisioned a motion-sickness testbed to evaluate vehicular motion sickness to address the repeatability aspect, and noted that testing in real vehicles on real roads has been strangely rare up to now.

“Few studies have been conducted in cars,” she said. “Instead, a lot of the work has been done for sea- and air-transportation modes, performed in driving simulators or on motion platforms. These results are not translating very well to road vehicles.”

Jones and her team leveraged an essential resource for the study, the streets of the university’s Mcity mobility-research campus. Here the new testbed, consisting of a scripted test drive, onboard instrumentation and new measurement protocols, went beyond comparatively crude prior research tools such as the Misery Index, which asks participants to self-rate their motion-sickness nausea symptoms on a scale.

The drive on Mcity streets consisted of a 20-minute, regimented series of turns and accelerations, as lateral and longitudinal movement affect everyone differently. “We wanted to have a repeatable, reliable exposure that effectively did induce motion sickness, but in a reasonable amount of time,” Jones said. “You can appreciate the resources required around it.”

The intent was to concentrate many types of normal driving maneuvers in that 20-minute sequence. It includes approximately 25 braking events, 45 left turns and 30 right turns. The test was conducted at two speeds and two levels of task performance. In one task, the test subject was in the front passenger seat and free to do whatever they pleased and look anywhere. Another cycle had the passenger perform a visual task, looking down at a tablet device (above).

Research-team members asked the passengers to rate their motion sickness using a 0-10 scale, with “0” equating to no motion sickness and “10” indicating “need to stop the vehicle.” The researchers determined that the scale was easily understood by test participants, serving as a robust method to report the progression of their feelings and responses during the test drives.

Sensors and cameras recorded acceleration and geospatial data from the test vehicle. The test subjects’ physiological measures, including sweat, skin temperature and heart rate were recorded via a wearable sensor, while head movement, which can increase or reduce sensations of motion sickness, was tracked with a special headband containing an accelerometer. A 3D depth camera captured facial features, head movements and participants’ posture. In the initial phase, 52 adults representing a spectrum of demographics completed the entire test protocol.

Takeaways from the study
Jones’ new study methods confirmed some existing notions about motion sickness and added some fresh insight. One of the most surprising was that younger people (under age 60) reported higher motion-sickness ratings than older test subjects, according to a white paper (https://mcity.umich.edu/measuring-motion-sickness-in-driverless-cars/) Jones authored detailing the Mcity-funded study. Less unexpected was that looking down to read on a tablet device resulted in higher motion-sickness ratings.

Jones and her team are extending the testing regimen to highways and 2-lane roads to determine if the findings from the largely “urban” Mcity testing translate to other roads and higher speeds, notably the effect of less “concentration” of sickness-inducing events. The new testing will come during a drive almost 2.5 times longer.

Will AV developers be able to do something about it? It’s difficult to say, Jones contends, noting the complexity of motion-sickness symptoms is the result of more than just the inputs of vehicle dynamics. “I think our mitigation strategies and our engineering solutions are going to have to extend beyond control of the vehicle itself,” Jones said. “I think that's low-hanging fruit and something that we're seeing as an obvious engineering solution that we can improve upon. But my concern is it'll likely need to be other solutions beyond just the vehicle dynamics themselves.”

Despite the intricacy of Jones’ research, she said nobody expects answers to be easy or quickly forthcoming. “I think we're only starting as far as doing a good job characterizing population-level [motion-sickness] responses in vehicles in a naturalistic way.”

Continue reading »
Our mitigation strategies and our engineering solutions are going to have to extend beyond control of the vehicle itself.”