A Tel Aviv, Israel startup company is taking the now-familiar concept of aromatherapy to a new level. Saying its research into “active scents” can heighten the alertness of drivers who might have been lulled by cruising with advanced driver-assistance systems (ADAS), in less-critical scenarios, it could make trips in rideshare vehicles a more-pleasant experience. Moodify’s efforts intrigued Toyota enough to instigate a $1 million investment from its Toyota AI Ventures venture-capital technology incubator.

Moodify also is a part of the Renault-Nissan-Mitsubishi alliance’s TLV Innovation Lab and has raised more than $2.3 million in investment since its inception in 2017. 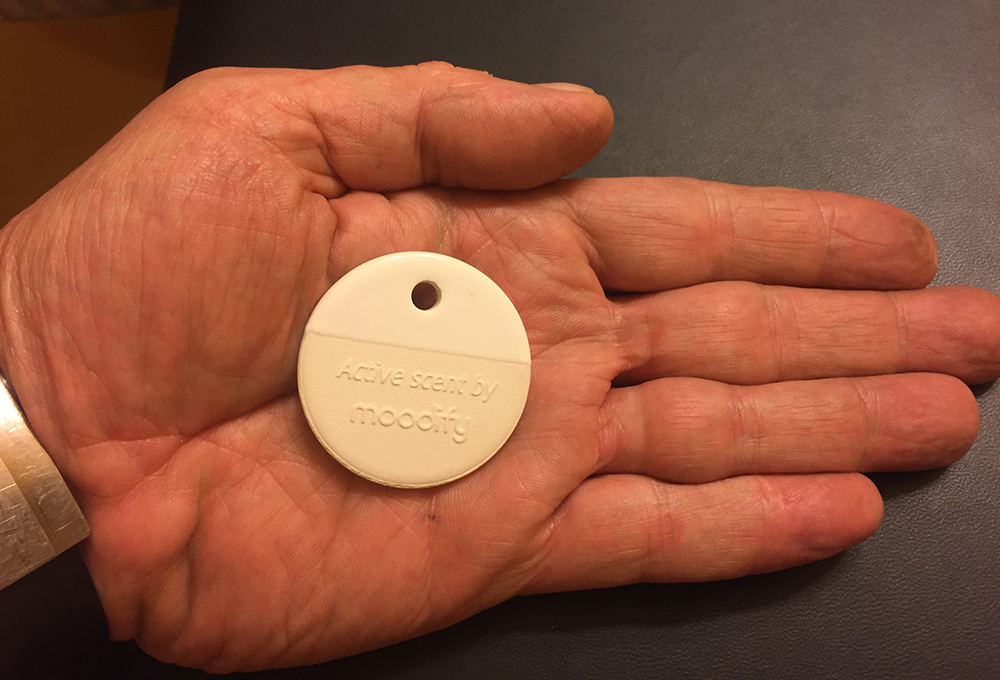 The company’s technology is not a perfume, stressed Moodify CEO and co-founder Yigal Sharon at the recent CES 2020 show in Las Vegas, where the company revealed Moodify White, its first formula for release.

Sharon said the company’s active scents are specially engineered to send chemosignals that stimulate specific tissue at the back of the nose called olfactory epithelium. This strip of tissue has millions of sensory neurons, each evolved to react to just one or two types of scents. Moodify’s decade of research in the neurobiology department at Israel’s Weizmann Institute of Science has produced scents that deliver highly targeted reactions in the brain, the CEO asserted.

Moodify White, he said, is so-named because it acts like “white noise” for the nose, helping to eliminate perception of bad odors. Sharon said the scent, demonstrated on a small ceramic disc about the size of a 50-cent piece, could be particularly useful for rideshare vehicles, helping each successive new rider tune out any unpleasant odors lingering from prior use. He added that the company also envisions a market for Moodify White with used-vehicle dealers and rental-vehicle agencies, where the potential to eliminate the perception of distasteful odors would be an obvious asset.

As delivered on the ceramic disc sized for vehicle use, the Moodify White scent is effective for approximately a month, Sharon said. He added that the size of the disc and concentration of the scents can be tailored for the intended space. Larger or more highly concentrated discs, he said, might be used for hotel rooms or aircraft, for example. At CES 2020, Moodify and automotive supplier Valeo announced a collaboration to market Moodify White in a system described as “a ground-breaking solution to car malodor.”

Beyond odor-squashing
Taking the job of masking odors beyond the low-tech, rearview-mirror-mounted carboard pine tree is only the beginning for Moodify. The company also is developing three other formulas for release, each with its own unique physiologic affects. Moodify Green is a natural compound based on human pheromones, some of which are found in the sweat produced when in fear, Sharon said. The compound “has a proven effect of improving awareness and increasing alertness,” said the company’s website.

A seemingly related formula, Moodify Red, is still under development but Sharon said the formula could prove effective in integrated driver-alertness monitoring systems in which the scent would be released if it is determined the driver is becoming dangerously drowsy. “It's like Red Bull, without the side-effects,” he quipped.

Moodify Red (a demonstration vial emits a red pepper-like smell) could be used in the vehicle cabin as “active” drowsiness deterrent, Sharon added, as current-production driver-drowsiness alerts can be disregarded. Moodify Blue, a synthesized copy of the pheromone found in tears, also could have vehicular applications. The company said it has been proven to reduce aggression and stress and is claimed to have potential to even improve the quality of sleep.

Continue reading »
It’s like Red Bull, without the side-effects.”