We've been concentrating in the Class-3 space, the electric space since day one, for five years.”

Things are very busy right now for heavy-duty electric vehicle (EV) startup Bollinger Motors. The company, founded in June 2015, recently moved into significantly larger digs in Oak Park, Michigan. This is one neighborhood over from its former HQ in Ferndale, and the new space only recently was vacated as an engineering center of Chinese EV startup Bordrin New Energy Vehicle Corp.

Bollinger continues in its plans to begin local production of several Class-3 (GVWR 10,001-14,000 lb) vehicles, including its B1 SUV and B2 pickup truck (above), plus a chassis-cab and a platform iteration. The day before SAE International spoke to CEO and founder Robert Bollinger (below) – during only his third week in the new Oak Park facility – the company revealed the concept for another commercial-vehicle platform, the sleek and functional-looking Deliver-E van.

It seems the new facility will provide much-needed engineering space, including for the Deliver-E van you announced yesterday.
It's not easy to find buildings in Detroit or around Detroit. They're either in great shape and someone else is already living in them, or they're beyond repair and it's going to take too long and too much money to fix. I've been looking for a good building for years. We were in that small shop in Ferndale. 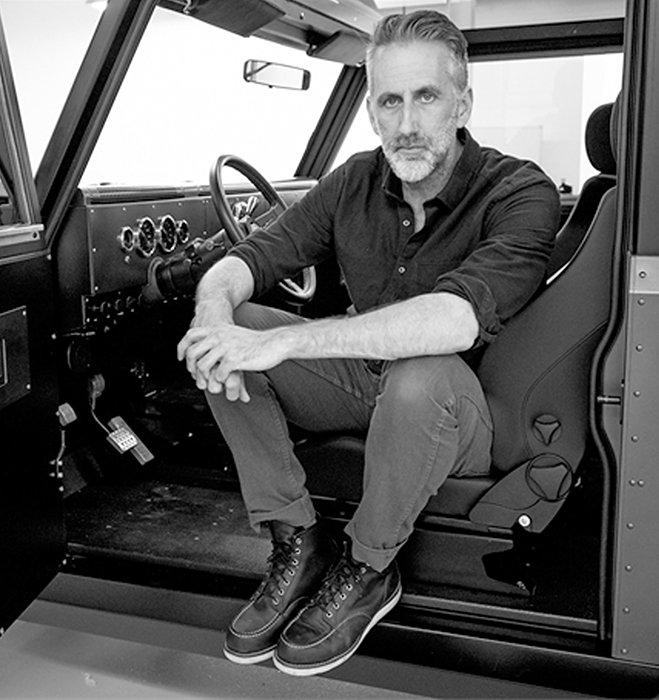 It was just right and got us a space that we could build the prototypes. But we definitely knew from the first day we moved in there it was too small, it was temporary. And in the meantime, this just fell in our lap – it was perfect and we grabbed it.

The new space in Oak Park is about five-times bigger than our old place. We were bursting at the seams over there. We've got plenty of room to double and triple the team, which is what we need to do quickly. We do get that question, aren't you biting off more than you can chew? [The Deliver-E] is a great adjunct because it uses everything that we've been working on for years. And also, it’s a result of people asking us to develop something for them for the delivery space. We're happy to announce this whole new segment to our business case.

Will the new space in Oak Park be used for production?
This place is for battery development. We develop our batteries in-house. It's for prototype building, component testing, test benching, engineering. The rest of the company is here as well – finance, marketing, purchasing, that's all here. But final assembly won't be here.

That's why the company moved here a couple of years ago, from New York. To be able to hire at the rate that we needed, we had to be here, where you could actually get people to work for you. Because no one wanted to work for us in New York, that's for sure. They were like, ‘Why would I move there? I don't even know who you are?’ We came here. We have the next eight or so jobs listed on our website. And we could add another eight jobs that we need right now. We're constantly hiring.

How will production be sourced?
The idea has been for a while now to use vendors for major components. Our whole body will be made by a local vendor, and that will be painted and go on to our final assemblers. The chassis, that entire frame, will be made by a vendor. Obviously, a separate vendor will then outfit it with all the components. And then that chassis will go to that same final assembler.

There are a lot of steps in the process. And different companies. But we try to always use the best company for that step. Right now, we're working with our frame manufacturer and finalizing our engineering for that. They are involved early on in what the product is, and we get their input and their expertise. And then they end up manufacturing it, so that way it is more seamless.

You’re managing battery-pack development in-house starting at the module level, that must have advantages in the midst of the COVID economy?
We are pre-revenue, so COVID did not change our sales at all, but we were able to keep everyone employed and keep moving during this whole thing, that was a blessing. We do develop our battery packs and we're starting our next prototype build with our next battery pack, our third, and this is the final version for production.

That's a big thing to have battery development in-house. We've bitten off an awful lot of things to chew and we're doing it all here. Our [mechanical director] Erik [Hardy] and his team developed that whole 35-kWh string idea, and then you keep adding another string and you can make multiple battery pack sizes and still use the same BMS [battery management system], hardware, software for all of it. So, it gives us tons of options.

Have you settled on a battery supplier?
We have definitely settled that, but we are working on our co-announcement. We've been working with them for a while, we're definitely dedicated to them, and it's a perfect module for a truck, for many reasons.

You’ve announced different-sized battery packs for Deliver-E. Are they related to the packs for your other models?
The different battery-pack sizes we had in the release of the Deliver-E, not all of those sizes will be in the consumer vehicles, because they would never fit. Like the 170 [kWh] and the 210 [kWh], those are future battery packs that could be possible for the delivery side. And while we are developing Classes 2B, 3, 4 and 5, it doesn't mean the bigger the class the bigger the battery. A lot of the bigger trucks sometimes have to go a very short range, so you might get Class 4, but just a 140 kWh battery pack. We want to give a lot of options for future delivery vans. But for our consumer side, the one and only we're developing right now is the 140-kWh pack.

You have been Class 3 from the start, which was a relatively blue-water scenario for you. What brought you to that space?
Basically, we've been concentrating in the Class-3 space, the electric space, since day one, for five years. From the very beginning, the idea was how to make a truck that has an awful lot of capabilities, a truck that carries more than 700 or 1,000 pounds, or whatever normal pickup trucks carry. Class 3 was where we wanted to go.

For that reason, we don't have airbags. We've been very honest about that from the beginning. But we are doing crash simulations, all that stuff, so it is definitely a quicker-to-market segment. The big part is the capability of the trucks, because the B1 and B2, they're not just ‘electric,’ they also have 15-inch [381-mm] ground clearance, the 4,000- 5,000 lb [1,814-2,268 kg] payload, all these great things. And that was to make a truck that would be better than and not directly compete with what in the future will be electric competition, like electric F-150 or electric Cybertruck. We're doing our own niche.

What's great about the delivery space is that's where we can get volume and get economies of scale and round out the business plan to have better pricing in the future. It works well with the future of all of the vehicles we're working on.

Was Deliver-E always part of the plan to gain scale?
The whole delivery space completely came from outside requests. That was not in the plan from when the company started five years ago. But since we had three different companies come to us who were in the segment, and say, ‘Can you make a delivery van version of that for us?’, we said, ‘Yes, we can.’ And then Erik [Hardy] spearheaded that whole development. Now we're showing what we've done back to them, and requesting that discussion. But it does definitely help with our whole business plan going forward, because there are economies of scale that could come back and influence our trucks.

Are global markets part of the plan?
The Class-3 segment is almost universal around the world. Basically, all of the other countries in the world took the U.S. standards for Class 3 and copied them, almost exactly. There are only slight, minor differences. We are homologating the truck for worldwide markets right now, while we engineer. Our first year will be North America – U.S. and Canada. Then hopefully move into Europe next. We have a lot of interest in the Middle East, for many reasons. Even Australia, we hope to do a right-hand drive version one day. But that's after we produce our first one.

Continue reading »
We've been concentrating in the Class-3 space, the electric space since day one, for five years.”