There’s no surer way to guarantee life for the Corvette after the last drop of petroleum has been consumed.”

With more than 20,000 of the eighth-generation Chevrolet Corvette sold since it arrived in showrooms last year, expanding this sports car family is next on the C8 program’s agenda. In keeping with GM’s goal to launch 20 electric cars and trucks by 2025, engineers currently are busy electrifying the new Corvette.

A Corvette hybrid will arrive for the 2023 model year wearing the ‘E-Ray’ trademark GM registered six years ago, according to industry sources who are not permitted to discuss the program publicly. To provide running room for this upstart, the Corvette’s iconic Grand Sport trim has been given a leave of absence.

Analysts who scrutinized the C8 Corvette’s mixed-materials chassis at birth saw this hybrid move coming. Its aluminum structural backbone (below) is a 6.5 x 12.6 x 41.0-in. (165 x 320 x 1048-mm) box that yields an internal volume of 2 cubic feet; on the current Stingray it houses only coolant lines. Squint your eyes and imagine GM’s Ultium pouch-style lithium battery cells packaged inside this chamber. Front spring, damper and steering components were located from the start of the program to give halfshafts from a pair of electric motors a straight shot to C8’s front wheel hubs. 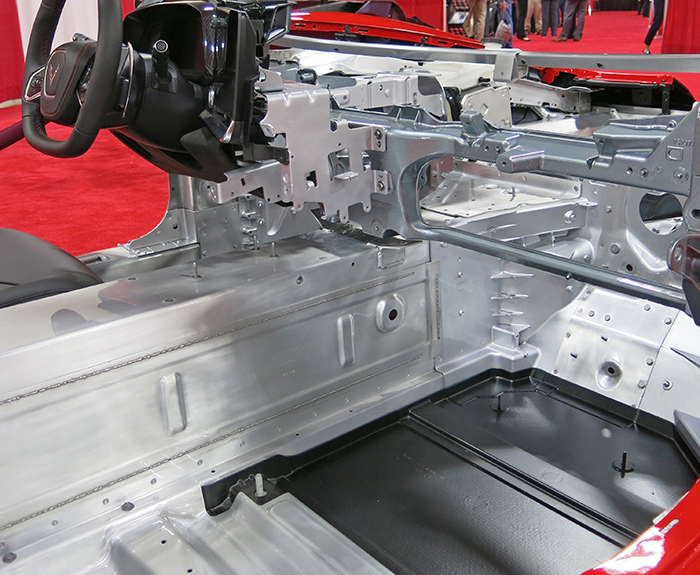 Two independently controlled 50-plus hp (37-plus kW) AC electric motors butted together will raise the Corvette hybrid’s total output to more than 600 hp (448 kW). The mid-mounted LT2 6.2-L V8 and its 8-speed Tremec dual-clutch transaxle will continue in the E-Ray’s hybrid system with minimal changes.

Significant performance gains will come from the improved power-to-weight ratio, the enhanced traction provided by all-wheel drive and torque vectoring on demand at the front wheels. In addition, electrification is expected to improve fuel economy by giving the engine a break during cruising. Propelled solely by its electric motors, the hybrid Corvette will be eligible for access to city centers where combustion engines alone are forbidden.

Downsides include a modest weight gain and some loss of front-trunk (“frunk”) cargo space. Assuming GM will configure the E-Ray as a plug-in hybrid, owners will have to scout out charging opportunities at home and on the road. With an expected base price well less than $100,000, E-Ray should take the fight capably to the Acura NSX, BMW i8 (replacement) and Tesla Roadster sportscars.

Proving this is no electric flash in the pan, GM has two additional Corvette strides in the making. For the 2025 model year, the Zora edition – honoring Corvette patron saint Zora Arkus-Duntov – will combine the highest-caliber weapons in Corvette Engineering’s arsenal to muster more than 1,000 hp (746 kW). This hybrid propulsion system will combine a twin-turbo 5.5-L DOHC V8 with a potent pair of electric motors.

To further exploit its vaunted Corvette nameplate, GM appears ready to bless a new family of battery-electric SUVs with the sportscar’s badge and design cues. Bloomberg recently reported that GM’s Project R will bring just such a product to market after 2025. At a CES 2021 presentation, GM design VP Mike Simcoe confirmed that the company’s coming Ultium battery pack “enables a wide range of models, especially for a broad brand like Chevrolet.

The Ultium platform will allow Chevrolet to further expand its range of electric vehicles to full-size pickups, compact SUVs and even high-performance vehicles.” Traditionalists may lament this extension of the hallowed nameplate to vehicles with too many seats, but there’s no surer way to guarantee life for the Corvette after the last drop of petroleum has been consumed.

Continue reading »
There’s no surer way to guarantee life for the Corvette after the last drop of petroleum has been consumed.”