Toyota’s third-generation 2022 Tundra was developed under the direction of veteran Mike Sweers, who has been the program’s chief engineer since 2010. The all-new pickup is based on Toyota’s F1 platform, shared with the Land Cruiser and an upcoming SUV (the 2022 Lexus LX600). Sweers, who is also senior VP, Product Development Office, detailed the new Tundra’s significant changes in a recent interview with SAE contributor Steve Macaulay.

Sweers noted that the new truck gets a fully boxed frame, whereas the outgoing truck’s frame featured open channels. “You’ve heard me talk for years about open C-sections and why open Cs are important,” Sweers said, adding, “My competitors have criticized me for using a C because our current pickup truck has a lot of compliance.” That benefits ride quality, a key focus of the Tundra development team and an attribute worth carrying into the new SUV.

“A truck shouldn’t ride like a truck,” he asserted. “If you jump out of an SUV or a car and get into this new Tundra you should say, ‘Oh, that’s nice.’” While Sweers (below) admitted that the ride quality with a fully boxed frame is inherently stiffer than an open-C structure, 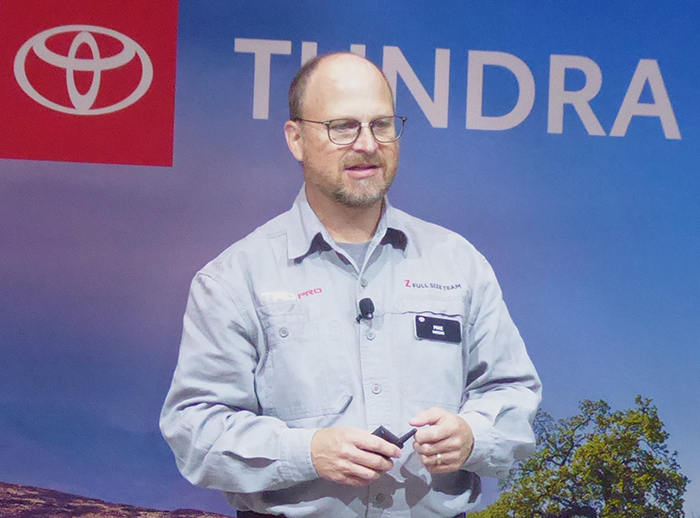 they’ve addressed that by replacing the rear leaf spring pack with a multilink setup with dual-stage coil springs as standard.

When driving some competitors’ trucks on Michigan I-94, Sweers observed their rear ends “kicking out,” a result of their frames being too rigid and their suspensions configured with heavy leaf packs to accommodate loads. He acknowledged a dynamic characteristic of coil springs: With a fully loaded bed or heavy tongue load while towing, the rear end wants to come down. Toyota is offering load-leveling air suspension in the rear for those who need the extra capability.

Tailor-welded frame rails
The Tundra’s new frame differs from most boxed truck frames in using laser-tailored steel blanks, Sweers explained, for strength with optimum mass efficiency. The frame build starts with steel sheet, followed by blanking out areas that are later filled in – via a wire-fed laser welding process – with the appropriate types and gauges of steel. These “tailored” blanks are formed into Cs, then two Cs are MIG welded together to form the full box.

Sweers, who has a farm in Michigan and uses his pickup as a tool as well as for transportation, has a pragmatic approach to the truck. While improving aerodynamics, for example, benefits overall efficiency, he points to an area of the outgoing Tundra that was affected by air flow (and had bothered Sweers in his personal truck): The optional power backlight which he likes, but has a problem with.

“My main complaint is that when you put that window down when driving, there is a back draft. The wind comes down off the top of the roof. It doesn’t separate. It goes into the bed and creates turbulence. You get back draft into the cab. I often have hay in the bed of my truck,” he noted. “If I put the window down after I’ve carried hay, I end up having hay in the cab. So, I don’t use it [the power backlight] that often. I said that has to be fixed.”

His team changed the roof design for 2022, and even made the CHMSL part of the aero package. Now the wind separates as it comes off the roof and hits the tailgate spoiler. This ended the interior chaff problem when the power window is down. Toyota’s aerodynamics team – who Sweers described as “a riot to work with. They’re super-passionate about what they’re doing,” came to him and said they wanted to rent a 20-foot covered trailer so they could test it in a wind tunnel. “We ended up buying it,” he said.

Materials mix
Engineering Tundra’s body and cargo bed called for a mixed-materials execution. Aluminum is used for the hood, front doors, and aluminum deck outer. There are steel fenders, bumper and tailgate. The bed is constructed of sheet molded compound (SMC).

“We asked ourselves how we could get mass out of the back of the truck,” Sweers said. The team looked at aluminum and high-strength steel for the application. But they decided on SMC because “it doesn’t dent like steel or puncture like aluminum. It doesn’t corrode,” he explained. And it’s lighter than the alternative materials. “We’ve used composite on Tacoma forever,” noted Sweers, who is also the engineering chief for the midsize pickup.

The downside of SMC, he admits, is that it costs a lot more than steel and aluminum. “The people in purchasing weren’t particularly happy because the decision was made to use a one-piece design for the composite bed, which impacts shipping costs,” Sweers said. His team was concerned about controlling the gaps in the bed to keep water from intruding beneath it. Sweers says that a bed assembly with multiple sections that could “stack like plywood” in the plant and be readily shipped was considered. But the fully-molded beds won out, even though transporting then is “like shipping bathtubs” – more expensive from a material and logistics standpoint. “This will sound like hooey,” Sweers admitted, “but our customers are expecting our stuff to last forever.”

The simple tailgate
Tailgates that have lots of articulation is a current trend in the pickup segment, and a point of controversy for Sweers. Are such tailgates answering a question that no one asked? “Do I really need Dutch doors on a tailgate?” he said. “What purpose does it serve? Do I have a door that swings out that I can’t open if I have a trailer on the back? Do I have a tailgate that opens down and smacks the ball of a trailer hitch?”

The Tundra team conducted a survey to find out what pickup owners were doing with their trucks’ tailgates. The answer: Loading ATVs, snowmobiles, dirt bikes and UTVs (utility terrain vehicles) is the priority. UTVs weigh more than the other vehicles and have a different tire-tread pattern, so the team focused on strengthening the rear structure around the tailgate. Their solution included engineering a steel reinforced composite structure for the bumper. There is a button on the key fob that automatically opens the Tundra’s tailgate. Otherwise, it is simply a tailgate.

A different hybrid approach
The 2022 Tundra offers a hybrid-electric powertrain, but the approach to its implementation is unique in the segment, Sweers explained. The V8 is gone and in its place are two engine choices based on two 3.5-L twin-turbocharged gasoline V6s. The i-Force generates 389 hp and 479 lb-ft while the i-Force Max is fortified with an electric motor, located in the P2 position within the transmission bell housing. The Max’s output is rated at 437 hp and 583 lb-ft. “I can sell torque,” Sweers said.

He originally wanted to use a diesel, which Toyota offers in other markets, And he admitted, “I was not a hybrid guy.” But during a development drive in Montana, he met a ranch owner who had several gasoline-powered pickups. Sweers asked him why none of the trucks were diesels. “Ever try to start a diesel truck at -40°F?” the rancher replied.

Then there was the hybrid issue. Sweers said that the objective with Tundra is not to achieve fuel efficiency but torque. The electric motor is used to supplement the power of the IC engine as it ramps from 0 to 2,400 rpm, at which point the turbos kick in. This, he says, is particularly advantageous in applications like towing. Interestingly, the Tundra’s electric motor is being powered by a 1.87-kWh nickel-metal hydride (NiMH) battery pack that is located beneath the rear seat of the truck. Sweers explained that they decided use long-proven NiMH rather than lithium-ion batteries for a few reasons.

“For one, the physical size of the [NiMH] battery is large—and were it a more power-dense lithium-ion pack it would still be large,” he said. “I’ve got the space to accommodate it.” Also, “lithium-ion batteries are getting harder to get,” which drives up the price. He said NiMH recycling was another facet of the battery choice.