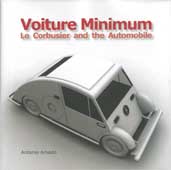 Table of Contents
Voted one of the top ten new design books, this lavishly illustrated book is a colorful account of Le Corbusier's love affair with the automobile, his vision of the ideal vehicle, and his tireless promotion of a design that industry never embraced. Le Corbusier, who famously called a house "a machine for living," was fascinated—even obsessed—by another kind of machine, the automobile. His writings were strewn with references to autos: "If houses were built industrially, mass-produced like chassis, an aesthetic would be formed with surprising precision," he wrote in Toward an Architecture (1923). In his "white phase" of the twenties and thirties, he insisted that his buildings be photographed with a modern automobile in the foreground. Le Corbusier moved beyond the theoretical in 1936, entering (with his cousin Pierre Jeanneret) an automobile design competition, submitting plans for "a minimalist vehicle for maximum functionality," the Voiture Minimum. Despite Le Corbusier’s energetic promotion of his design to several important automakers, the Voiture Minimum was never mass-produced.

Architect Antonio Amado describes the project in detail, linking it to Le Corbusier’s architectural work, to Modernist utopian urban visions, and to the automobile design projects of other architects including Walter Gropius and Frank Lloyd Wright. He provides abundant images, including many pages of Le Corbusier’s sketches and plans for the Voiture Minimum, and reprints Le Corbusier’s letters seeking a manufacturer. Le Corbusier’s design is often said to have been the inspiration for Volkswagen’s enduringly popular Beetle; the architect himself implied as much, claiming that his design for the 1936 competition originated in 1928, before the Beetle. Amado, after extensive examination of archival and source materials, disproves this; the influence may have gone the other way.

The Relationship Between Product Planning and Product Design