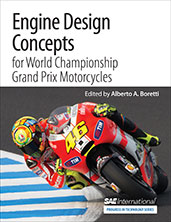 Table of Contents
The World Championship Grand Prix (WCGP) is the premier championship event of motorcycle road racing. The WCGP was established in 1949 by the sport's governing body, the Fédération Internationale de Motocyclisme (FIM), and is the oldest world championship event in the motorsports arena.

This book, developed especially for racing enthusiasts by motorsports engineering expert Dr. Alberto Boretti, provides a broad view of WCGP motorcycle racing and vehicles, but is primarily focused on the design of four-stroke engines for the MotoGP class. The book opens with general background on MotoGP governing bodies and a history of the event’s classes since the competition began in 1949. It then presents some of the key engines that have been developed and used for the competition through the years. Technologies that are used in today’s MotoGP engines are discussed.

A sidebar discussion on calculating brake, indicated, and friction performance parameters provides mathematical information for readers who like such technical details. Future developments of MotoGP engines, including the use of biofuels and recovery of thermal and braking energy, are presented. The introduction concludes with a chart that details the winners of the various classes of WCGP motorcycle racing since the competition began in 1949.

The bulk of the book consists of four previously published SAE technical papers that were expressly chosen by Dr. Boretti to provide greater insight to the relationships between engine parameters and performance, namely the influence on friction and mean effective pressure of traditional spark ignited four stroke engines tuned for a narrow high power output.

The first paper provides the reader with a quick way to estimate the friction loss and engine output. The second paper discusses output and fuel consumption of multi-valve motorcycle engines. The third paper, published in 2002, compares WCGP engines developed to comply with the then-new FIM regulations that allowed four-stroke engines in the competition. The fourth paper examines specific power densities and therefore the level of sophistication and costs of MotoGP 800 cm3 engines. This paper shows the performance of these as well as the 1000cc SuperBike engines. The fifth paper presents four engine concepts including one for a MotoGP/Superbike with 2 and 3 cylinders. The sixth paper compares 3 and 4 in-line, V4, V5, and V6 layouts through 1-D engine simulations. The seventh paper considers the actual operation of 800cc MotoGP engines on the race track, where the percentage of the duration in fully open throttle is less than 20% of the race, but the partial throttle is used for as much as 80% of the race. The final paper in the compendium reports on the Honda oval piston engine concept.

Design of Racing and High-Performance Engines 2004-2013 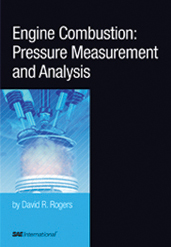 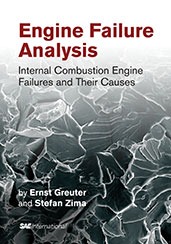