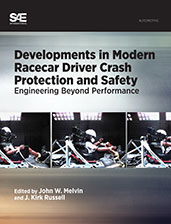 Table of Contents
For many years, the evolution of safety improvements in motorsports was the result of a combination of science and perceived safe practices. Most safety developments were not based on rigorous laboratory testing, but rather on intuition and a “let’s try it and see what happens” approach.

During the last few decades, motorsports has benefited from the organized research efforts made possible by academia, manufacturers, and sanctioning bodies, leading to present-day motorsports safety methodologies based on solid data and testing.

This compendium, edited by some of the foremost racing safety experts, comprises selected technical papers that document the development and implementation of key motorsports safety technologies now in use. It is intended to provide racing professionals and enthusiasts with a concise overview of the significant engineering developments in motorsports driver safety that has occurred during the past two decades.

The 13 papers chosen for this compendium, published between 1990 and 2013, reflect landmark safety studies and developments of that time. Eleven of the papers were published by SAE International and two were presented at the Stapp Car Crash Conference. The papers cover the following topics:

The final paper is a study on the detailed performance of restraint systems and seats in examples of severe stock car crashes. The paper represents a succinct example of modern crash investigation of racing crashes with crash recording data, detailed injury analysis, and protective system performance.

The progress in motorsports safety, as described in this compendium, has been dramatically effective in reducing driver injuries at the top levels of motorsports. Unfortunately, this is not true at the lower levels, where drivers continue to suffer preventable injuries and fatalities.