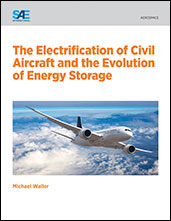 These soon gave rise to the need for engine-mounted electrical generators as the primary source of in-flight power for the electrical loads and onboard recharging of the aircraft battery system.

Of all the backup power sources, batteries represent the most common means of storing energy for auxiliary or emergency power requirements. It is not unusual for a typical commercial airliner, such as a B-737 or A-320, to have dozens of batteries on board.

Over time, multiple battery chemistries were put to the test and the industry is still working on the optimal option.

The lithium-ion technology has been gaining acceptance, with some important aspects to be considered: the application type, basic safety requirements and the presence or absence of humans on the vehicle. The Electrification of Civil Aircraft and the Evolution of Energy Storage, edited by Michael Waller, presents 10 seminal SAE technical papers which address multiple aspects of specific design, cell configuration and mitigation strategies in the case of battery failure.

Additionally, with all the changes resulting from monitoring, control, and performance/safety test criteria, battery manufacturers have found themselves becoming systems integrators, having to quickly acquire knowledge of electronics and system modeling.

As new technologies become available, industry will attempt to take advantage of all potential benefits, in a process that can have a profound impact on the product offerings that emerge and in the way business is conducted.

The Electrification of Civil Aircraft and the Evolution of Energy Storage presents a solid perspective on how civil aviation has matured in its quest to develop lighter, more efficient and less polluting aircraft, and also more electric.