The Use of Electric Batteries for Civil Aircraft Applications PT-192 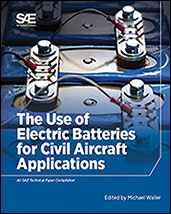 The Use of Electric Batteries for Civil Aircraft Applications is a comprehensive and focused collection of SAE International technical papers, covering both the past and the present of the efforts to develop batteries that can be specifically installed in commercial aircraft.

As industry events unfolded, the FAA and committees from RTCA and SAE continued efforts to create meaningful standards for the design, testing, and certification of Li-Ion battery systems for commercial aviation. The first document issued was RTCA DO-311 on Mar. 13, 2008.

As the industry continues to develop concepts and designs for the safe utilization of the new Li-Ion battery systems, many are already working on designs for all-electric aircraft, and small two-seat training aircraft are currently flying.

The challenges for an all-electric, transport category aircraft will be significant, and the battery design ranks as one of the greatest. The more energy that is packaged into a small area to provide for the propulsion requirements, the more stringent are the design parameters and mitigation methodologies needed to make the system safe. The success or failure of this endeavor lies squarely on the shoulders of the engineers and scientists developing these new systems, and places additional pressure on the regulatory agencies to acquire the relevant knowledge for the creation of minimum operational performance standards for them.

Edited by Michael Waller, an industry veteran, The Use of Electric Batteries for Civil Aircraft Applications, is a must-read for those interested in the new power generation making its way into commercial aircraft.