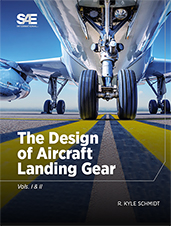 Table of Contents
The aircraft landing gear and its associated systems represent a compelling design challenge: simultaneously a system, a structure, and a machine, it supports the aircraft on the ground, absorbs landing and braking energy, permits maneuvering, and retracts to minimize aircraft drag. Yet, as it is not required during flight, it also represents dead weight and significant effort must be made to minimize its total mass.

The Design of Aircraft Landing Gear, written by R. Kyle Schmidt, PE (B.A.Sc. - Mechanical Engineering, M.Sc. - Safety and Aircraft Accident Investigation, Chairman of the SAE A-5 Committee on Aircraft Landing Gear), is designed to guide the reader through the key principles of landing system design and to provide additional references when available. Many problems which must be confronted have already been addressed by others in the past, but the information is not known or shared, leading to the observation that there are few new problems, but many new people.

The Design of Aircraft Landing Gear is intended to share much of the existing information and provide avenues for further exploration. The design of an aircraft and its associated systems, including the landing system, involves iterative loops as the impact of each modification to a system or component is evaluated against the whole. It is rare to find that the lightest possible landing gear represents the best solution for the aircraft: the lightest landing gear may require attachment structures which don’t exist and which would require significant weight and compromise on the part of the airframe structure design.

With those requirements and compromises in mind,The Design of Aircraft Landing Gear starts with the study of airfield compatibility, aircraft stability on the ground, the correct choice of tires, followed by discussion of brakes, wheels, and brake control systems. Various landing gear architectures are investigated together with the details of shock absorber designs. Retraction, kinematics, and mechanisms are studied as well as possible actuation approaches. Detailed information on the various hydraulic and electric services commonly found on aircraft, and system elements such as dressings, lighting, and steering are also reviewed. Detail design points, the process of analysis, and a review of the relevant requirements and regulations round out the book content.

The Design of Aircraft Landing Gear is a landmark work in the industry, and a must-read for any engineer interested in updating specific skills and students preparing for an exciting career.
Author: Robert Kyle Schmidt
Publisher: SAE International
Specs: Published by SAE International with a Product Code of R-455, ISBN of 978-0-7680-9942-3, and 1090 pages in a hardbound binding.
Related Topics:
Landing gear
Accident reconstruction
Dampers and shock absorbers
Aircraft
Control systems
Entry, descent, and landing
Research and development