In the past ten years, the all composite commercial aircraft has become a reality and the need for the aircraft designer to consider electromagnetic threats has also grown. Aircraft systems are now designed with miniaturized electronic components, which make them more sensitive to EMI; and it turns out that the safety of flight relies on the functionality of some of these systems.
Composite materials (Polymer Matrix Composites, PMCs) are characterized by their low conductivity that greatly reduces the shielding effectiveness of the aircraft structure and consequently the protection of systems against HIRF, and mainly against lightning indirect effects. Indeed, due to the low conductivity, lightning current which is focused in low frequency spectrum, will not decay through the composite skin material as quick as it does in all metal skin; and aircraft skin is not thick enough compared to the skin effect for this low frequency spectrum, to reduce substantially the current through composite structure. Therefore the diffusion effect of lightning current in composite aircraft structure will be substantially higher than all metal aircraft, so there will be the developed voltages in systems.
On an all metal aircraft, the equipment is referenced to aircraft structure which is mainly resistive and keeps systems at the same potential. On a composite aircraft, this can only be achieved through a grounding network which impedance is governed by its resistance and self inductance. Consequentially, the coupling mechanism of electromagnetic fields and current on cables will not be equivalent for composite and all metal aircraft, nor their induced effects on systems, mainly for common mode ones.
Thus the following question would be raised: For an equivalent electromagnetic threat coupling to cables interconnecting avionic systems, does the qualification per the present standards RTCA DO 160 (or equivalent) using a metallic bench test meet the expectations of tests for systems in composite aircraft?
This paper gives an insight on the difference on coupling mechanisms that may lead to systems susceptibility, on the two types of aircraft.
DOI: https://doi.org/10.4271/2011-01-2513

More About Lightning Induced Effects on Systems in a Composite Aircraft 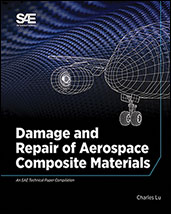