You might expect Amanda Simpson to play things close to the chest.

After all, as the current Vice President of Research and Technology at Airbus America, she has a lot of responsibility on her shoulders. There’s also her government background, both in the U.S. Department of Defense advising military energy projects and a presidential appointment in 2010 by Barack Obama as Senior Technical Adviser to the U.S. Department of Commerce. In that role, she advised on policy and export control issues to protect the security of the United States, that some might see as prompting secrecy. 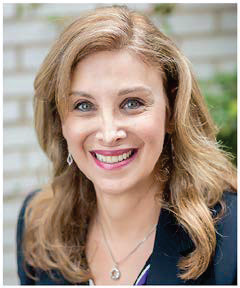 But Simpson is a straight shooter, and open about many things. She’ll frankly tell you that sustainability must be a priority for the global mobility industry for the survival of humanity. She’s vocal about her thoughts on industry inclusivity, and the need for diverse perspectives to advance technology.

And she doesn’t shy away from sharing her identity as a transgender woman.

Simpson was living and working in Tucson, Arizona, when she transitioned in 1999. She was already active in employee resource groups working to provide resources for other diverse folks in the company when she approached her boss to share her plans to transition. Her boss was supportive, and even offered to relocate Simpson anywhere within the parent corporation with the same pay and responsibility, but she chose to stay.

“When my transition went public, which it did very much so in a small city like Tucson, I could do things two ways. I could be very private and withdrawn and go stealth as we used to say, or I could pave the path for those who are going to go through these issues in the future,” Simpson said.

“And I understood that others had gone through what I was about to go through in the past, but nobody took notes from it. There were no records, there were no best practices; the company didn’t know what to do, and certainly the general public had no idea,” she continued. “So I felt someone needed to blaze the trail and leave trail markers for those who are going to follow, and maybe come up with the trail guides so that people understand what’s about to happen and how to respond, and give those ideas to the company.”

Simpson and a close friend developed policies for the company based on her experience, and those practices were adopted and eventually shared with many corporations over the following decade and are even used as guidelines for transitioning employees today.

Such visibility brought a mix of highs and lows for Simpson.

She became increasingly active in public advocacy to make work and engineering environments more inclusive, but faced discrimination from some co-workers who weren’t supportive of her transition. Her openness about her identity made her the first openly transgender woman to receive a presidential appointment, but she does not want to only be known or recognized for her identity. After all, she’s a physicist, an engineer, a technologist, a pilot, a manager—and her work is just a much a part of her as anything else. 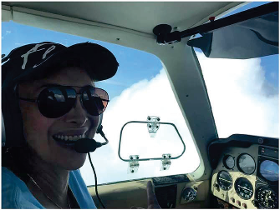 In living out loud, Simpson has always striven to do her job and do it well, letting her work speak for itself. If there are opportunities to weave her advocacy into that work, like a speaking engagement here or a group lunch with a pride group during a site visit to the United Kingdom there, she’ll take them.

Professionally, she’s passionate about bringing sustainability to the forefront of the aerospace industry. At SAE International’s AeroTech in March, Simpson spoke on the work Airbus is doing surrounding sustainable aviation, detailing possible uses of alternative fuel sources and sharing Airbus’s goal to reach carbon neutrality by 2050.

The industry is more open to this push for sustainability now than ever before, and Simpson attributes that shift in thinking to a number of factors, not least of which is an increasingly diverse, more socially-conscious group of professionals driving progress.

“Because of these voices, these more diverse opinions, they’re bringing social responsibilities to the forefront, and we’re seeing this increased focus on sustainability. This is only going to grow because as we in the aerospace industry start talking about it, it’s resonating with the general public,” she said. “They want to see this. They want to slow down the rate at which the temperatures are rising, the oceans are rising, the impacts of severe storms, wildfires, floods, famine, and all these things that come from it. And sometimes in aerospace where as engineers we want to design and we want to do something that’s really neat and cool, but we’re learning to become citizens of the planet at the same time, so I think that’s why there’s been more of a push.”

Simpson is continuing to share that message of sustainability through her many speaking engagements and conversations with industry leaders all over the world. At Airbus, she’s maintaining a steady eye of the future, pushing her organization to keep moving in directions that will continue the progress they’ve already made.

And though she’s proven she’s a force for forward progress, Simpson would rather you focus on the changes she’s contributed to rather than her as the contributor.

“While I may be remembered as an innovator, as a trailblazer, or someone who broke down some barriers within the LGBT community, particularly in the industrial systems aerospace and even government positions, I’d rather people remember that these things are moving forward than to know that it was me who was behind it,” she said.

Simpsons contributions, those made before her, and those yet to come, will continue to pave the runway into the future. And that’s just the way she likes it.

Want to know even more about Airbus’s trailblazing Vice President of Research and Technology? Check out the chapter on Amanda Simpson in the SAE International book “Flight Paths to Success: Career Insights from Women Leaders in Aerospace.”