“Passive safety for autonomous vehicles is a pretty complicated problem to solve, which is why we’re starting out with the simplest scenario: a frontal crash with a front occupant in a partial-recline position,” E. Scott Dershem, Autoliv’s Vice President of Product Development, said in an interview with Automotive Engineering at the safety supplier’s Auburn Hills, Michigan technical center.

Safety engineers know occupants in self-driving vehicles might be seated in unconventional positions. “For us, it’s not really about a particular level of autonomy; it’s more about the level of seating flexibility inside the vehicle,” he said.

That’s why "seat-centric" safety is vital. “There are laws and regulations now as to where seatbelt anchors have to be. But as seats rotate and recline, today’s anchor points aren’t in the optimum location. That issue could be solved with a change in the anchor point, such as moving it further forward to get the seatbelt off the abdomen area,” he offered. 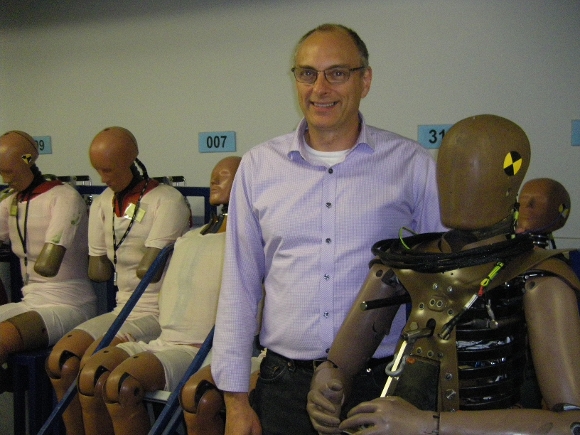 
In-cabin features heavily influence the packaging of airbags. But if a self-driving vehicle is without a conventional instrument panel or other traditional cabin fixtures, the seats are the prime packaging locale for airbags.

“We’ve been working on our Life Cell concept since 2014. It’s a curtain airbag with two inflators,” said Dershem. The Life Cell airbag deploys from the seat and when fully deployed essentially envelopes the occupant’s head and shoulders. “The product has evolved. Our first-generation version didn’t go over the occupant’s head,” he said.

Researchers and engineers are looking for ways to address what happens during a so-called ‘normal-recline seating position.’ Computer simulations and testing with crash dummies show that the occupant’s head won’t be within the curtain airbag’s protection zone when seated in the ‘normal recline’ position.

“We’ve been talking about raising the seat up as you recline. That does two things: It gets the head back into the curtain area during a side impact. It also puts the head above the vehicle’s belt line and back into the window area so the occupant doesn’t get motion sickness,” he said, referring to a malady that’s possible when riding in an autonomously-driven vehicle.

Autoliv’s typical testing process for passive safety systems starts with computer simulations. That’s followed by static testing to determine what happens to crash test dummies when airbags deploy and sled crashes with crash-test dummies into fixed barriers. “It’s not uncommon to go back to the beginning if we want to tweak an under-development technology,” he said. The final testing stage involves actual vehicles.

Autoliv technicians likely won’t conduct crash tests with dummies inside physical vehicles before the 2020 timeframe. “Some vehicle manufacturers are looking to do autonomous mobility as a delivery service, so those are likely to be first in-line for actual vehicle testing,” he said.

Passive safety systems offer protection during a vehicle crash, but those same technologies could be vital in instances of accident avoidance.

“There will be evasive maneuvers by autonomously driven vehicles that prompt a quick lane change or emergency braking to avoid a collision with another vehicle, pedestrian, bicyclist, deer, or some other object,” said Dershem. “Imagine if the occupants are in ‘living room’ seating position and the vehicle does 1G braking and no one is belted. It’s going to get ornery inside that vehicle.” Continue reading »