You’re almost getting to a crossover point where within a couple percentage points, electrification – either light or heavy – can play in this market.”

With its asphalt-ripping Hellcat and Demon V8s dominating the engine headlines at FCA North America, and boom times for Ram and Jeep sales, hybridization and battery electric vehicles (EVs) have “not been the leading-edge story,” notes Michael “Micky” Bly, the company’s newly arrived head of Powertrain Engine Engineering. And, he acknowledged, the company is clearly perceived as trailing the industry in the new-propulsion space.

“When I started the interview process to come to this position, that was one of my questions: ‘Where is FCA? Give me some insight,’” Bly (below) told Automotive Engineering at the company’s recent 2020 product preview. “Because what I’m intrigued about is seeing this technology develop—as well as ICE’s continuing progress at the same time.”

Before hiring in, Bly was encouraged by a peek behind the future-product curtain, and by FCA’s commitment to invest nine billion euros in electrification over the next few years. “And that number is a reflection of what’s really coming in the portfolio,” he 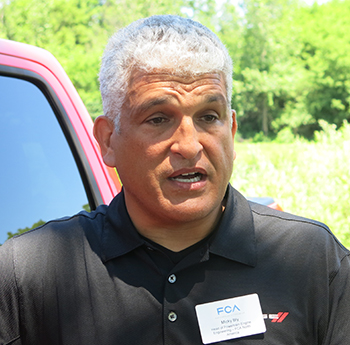 asserted, “either from a technology point of view—whether it’s EVs, plug-in hybrids, mild hybrids—or suppliers we’re working with, or conversion around the world of our manufacturing sites and engineering facilities.”

FCA is expected to benefit from Bly’s extensive experience on both the OEM and Tier-1 sides. He was previously American Axle’s global VP for Product Management Electrification, based in Europe. Before that, at GM, he held key engineering management positions for powertrain and vehicle electrification. With veteran FCA powertrain boss Bob Lee’s recent retirement, Bly is teaming with Jeff Lux—named head of global powertrain development—in an interim arrangement to fill Lee’s position.

Their current advanced-propulsion initiatives are limited but significant. FCA is in the vanguard of adopting 48-volt mild-hybrid systems in North America, with Continental and Magneti-Marelli “eTorque” systems in production on both its gasoline V6 and V8 engines, respectively, for Ram and Jeep. There’s also the Pacifica plug-in hybrid that’s widely lauded by industry engineers.

Meanwhile, FCA is catching up in the perception battle. “Right now, we’re kind of putting in spot solutions,” he said. “The [PHEV] Pacifica is a good example: a good vehicle with a good purpose. It’s demonstrated fantastic fuel-economy performance. How do we make it a little better?”

What to do, what to let others do
Bly and Lux’s team are deep into establishing FCA’s propulsion-tech roadmap and are focused on building supplier relationships in the key electrification areas. “Motors: where are we going to go with motors? What is our technology; who’s going to be our partner?” he said. “Batteries, it’s boiling down to maybe three suppliers after all the startups maybe 10 years ago when I was starting in this space. And we know who they are—it’s the LGs, it’s the Samsungs, Panasonic, CATL. Those are kind of the four biggies. Spend a lot of time with it, see how those roadmaps can fit into our area.”

Bly believes power electronics is a core technology area for FCA. “We’re trying to understand where we take that,” he said. “There are a lot of component suppliers; with power electronics you’ve got to pull them all together, right price point, throw in software and controls and that’s where we have a core fundamental advantage, I think. That’s one area I see as a thrust; we can make an impact.”

EVs and the supply challenge
Bly acknowledges that electrification presents a tremendous pressure for suppliers, who must carefully balance their investments between “pay the bills” legacy products and new technologies that may take years to build scale and earn a profit. He uses his previous experience in driveline supply as an example. “There are four or five suppliers that are really good at axles and transmissions and they’re fighting for 100 million cars every year. They want that volume split up.

“In the electrification space, you go all the way down to 2%, 5%—even 10% if you stretch it—of the market,” he explained. “Let’s say 10 million cars—you’ve got 10 suppliers fighting like heck for 10% of the market today to grow to 20%, maybe 25%, maybe 30%. It’s a bloodbath right now for the suppliers,” he noted. “How do they bring a technology forward that’s compelling?”

And the U.S.’s shift away from small cars, combined with the still-high cost of batteries (see story, p. 34) means there is a widening divide regarding what works in various world markets, Bly said. Or what’s possible in relation to varying regulatory strictures. He noted that FCA has to “be very careful of our [fuel economy] compliance. We’re buying credits—European consolidation credits with Tesla. So, we’ve got to make sure we get a compliance play. We’re not in position to spend any money to sell cars. We have a large [model line] footprint, we have big vehicles.”

Bly is optimistic about the decreasing price points of batteries and electric motors. “You’re almost getting to a crossover point where, within a couple percentage points electrification—either light or heavy—can play in this market.”

The IC future
For the Detroit Three and their dominating pickup business, it’s a great time for internal combustion—even diesel.  But Bly concedes that the ICE’s time in waning. Diesel will have a place until the end of the 2020s, he predicts, but the technology is “sunsetting.” The cost of aftertreatment to meet regulatory compliance is getting “really expensive,” Bly explained. What about ICEs in general: are they in their descendancy? “I think there are certain companies that are done,” Bly stated. “We’re not in that place. We probably have one more [engine development] cycle for sure that we have to execute.

“We’re going to turn one more, I think, to get all of our highest fuel-efficiency numbers, get the output up a little bit more, maybe downsize it a little bit more—find that sweet spot in that space.” That’s why FCA’s powertrain group is hiring engineers—to do both ICE and EV development, Bly concedes. “I’ve got to find a way to spend nine billion dollars,” he said with a laugh, noting that propulsion technology will continue to be an FCA core engineering competency going forward.

Continue reading »
You’re almost getting to a crossover point where within a couple percentage points, electrification – either light or heavy – can play in this market.”