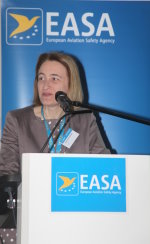 With the theme of "Emerging Technologies and the Enabling Role of Standards," the summit brought together civil and military regulators and certification professionals, aerospace industry leaders, and subject-matter experts to discuss transformational technologies and key topics such as Internet of Things (IoT) and digital manufacturing, novel vertical flight, model-based systems engineering, cybersecurity, wireless networking, and nanomaterials.

The objective of the summit is to gather aerospace technical experts, executives, and thought leaders to investigate new technologies and the role of standards supporting certification to improve aerospace safety, efficiency, and economy.

EASA speakers Rachel Daeschler (shown), Deputy Strategy and Safety Manager; Pascal Medal, Chief Engineer; and Richard Minter, Chief Expert on Airframe spoke about the trend toward performance-based regulation and the partnership with industry through the use of industry standards, as well as the use of data in addressing safety.

SAE International CEO David Schutt also delivered an opening-day keynote address, which highlighted how all transport modes are converging, and how standards are playing a vital role in this development.

The summit's day-two keynote was presented by Giorgio Cioni, Director of Armament and Aerospace Capabilities, NATO. He discussed the promotion of aerospace interoperability within the NATO alliance and how NATO is applying a total system approach to aviation. Cioni also talked about the role of SAE in supporting NATO, noting that SAE could consider looking at standards considered by NATO where there are as yet no civilian standards, particularly for interoperability.

At the session on IoT and Digital Manufacturing, featuring speakers from ATI, ATOS, Rolls-Royce, and IBM, the concept of the "digital twin"—a virtual model for a process, product, or service—was covered extensively. Additionally, the concept of servitisation and how companies are transitioning from selling product to selling services was also discussed.

The session on Novel Vertical Flight included speakers from EASA and GAMA, and covered the Volocopter, a single-place experimental electric multi-rotor helicopter with 18 electric propellers. The impact of electric propulsion into aviation was also discussed.

The panels on Model Based Systems Engineering and Wireless Networking featured participants from the U.K. Ministry of Defence, the International Council on Systems Engineering (INCOSE), UTC Aerospace Systems, Airbus, EASA, and Southampton University.

Panelists at the Cybersecurity session, including representatives from EASA, ICAO, FAA, and SESAR, stressed the importance of facing current and future cybersecurity challenges, including actions such as establishing a cyber-regulatory framework for safety and security, implementing risk-mitigation strategies, and promoting a cyber-culture.

The Nanomaterials session, featuring speakers from, Rolls-Royce and CSEM, covered some of the latest technological developments in the field, including graphene, and the key factors for standardization at a nanomaterials scale.

"The summit once again saw the value of industry standards as a key enabler for technology development, particularly in supporting certification. We look forward to working with the industry, regulatory, and research community in taking on the standards needs identified in the event," said David Alexander, Aerospace Standards Director at SAE International."

The next SAE International Aerospace Standards Summit will be held in 2018 in North America.